Tomorrow is Mother’s Day.  For me, it is a day of joyous celebration–an opportunity to honor my own mother, Mary, for the love and blessing she has poured into my life (that’s my father Bernard on the right), 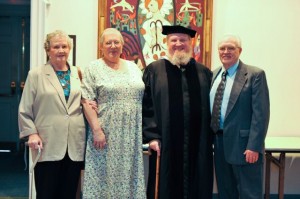 But sadly, Scripture is not kind to women.  To take an example particularly relevant to Mother’s Day, childbirth was regarded by the priests as a defiling act, for mother and child alike (see Leviticus 12:2-8).  This is not surprising: in the priests’ world view, the life of any being was contained in the blood, so that blood belonged exclusively to God.  Childbirth being a bloody process, it is little wonder that the priests regarded it as defiling.  Still, the period of uncleanness is not the same with every birth, but depends upon the sex of the child: 7 days of impurity for a male child, 2 weeks of uncleanness if the baby is female!

Broadly speaking, in the patriarchal (that is, male-centered) societies out of which both our Old and New Testaments emerged, a woman was regarded as the property of a man: first her father, later her husband.  In the priestly version of the Ten Commandments,  Exodus 20:17 states, “Do not desire your neighbor’s house. Do not desire and try to take your neighbor’s wife, male or female servant, ox, donkey, or anything else that belongs to your neighbor.”  Here, the wife, like the household servants, domestic animals, and everything else included in a man’s “house,” is regarded as property.

In the New Testament, then, it is no surprise to find passages restricting women’s role in the church.  1 Timothy 2:8-15 denies women the right to preach or lead, an argument made on the basis of the creation story: “Adam wasn’t deceived, but rather his wife became the one who stepped over the line because she was completely deceived” (1 Tim 2:14; a rather biased reading of Genesis 3, where the man and the woman alike are held accountable).

Still, this is just what we would expect to find in a text that comes, as the Bible does, out of a patriarchal culture.   In biblical studies, what we do not find can prove as interesting and significant as what we do; surprises and exceptions take on a particular significance.

First of all, let’s consider the very beginning of the Bible.  While the traditional reading of Genesis 1:26 has God say, “Let us make man” (see the King James Version), the Common English Bible has “Let us make humanity” (Gen 1:26).   This is not, as some might think, political correctness.  It is a matter of accurate translation. In Hebrew, the word for “man” is ‘ish. But the word used here is ‘adam, which means “humanity.”  Human being is set apart from everything else in creation by something not mentioned.  There are “kinds” of plants, birds, fish, and animals (see Genesis 1:11-12, 21, 24-25).  However, there are no “kinds” of people. This is not because the ancient Israelites were ignorant of other races and cultures: Palestine was a crossroads of ancient civilizations, African and Asian; Jews regularly encountered people of varying ethnicities, speaking a host of languages.  Yet Israel does not distinguish among these races and nations.  Instead, there is just ‘adam: one single human family. It is a remarkable confession, rejecting every form of racism and jingoistic nationalism.

It is particularly important that we translate ‘adam correctly, because Genesis 1:27 goes on very plainly to state:

Both masculinity and femininity, both maleness and femaleness, are reflections of God in this text. There is no basis here for placing women under men. To be sure, Israel’s traditions were not always equal to this insight!  Yet here it is, at the very beginning of the Bible.  Sexism, like racism, is denied any place in God’s rightly ordered world.

Another surprise comes in the second version of the Ten Commandments, in the book of Deuteronomy (which in Greek means “second law”).  Deuteronomy 5:21 reads:

“Do not desire and try to take your neighbor’s wife.

Do not crave your neighbor’s house, field, male or female servant, ox, donkey, or anything else that belongs to your neighbor.”

In the Gospels, Jesus continually demonstrates concern for women (see the discussion of Jesus’ position on divorce in my earlier blog, “HWJR?”).  John’s gospel describes the remarkable story of the Samaritan woman who meets Jesus at the well, talks with him, and becomes the first missionary! Jesus’ movement was supported by women (Luke 8:2-3).  At the end, even when his disciples had forsaken him, the women remained, at the cross and at the tomb, so that it was women who were the first eyewitnesses to the resurrection.

Viewed in the context of the whole of Scripture, then, we can understand the attitudes expressed in 1 Timothy 2:8-15 without feeling bound by them. In my tradition, for nearly as long as the Methodist movement has been in existence, women have been preaching.  In 1787, John Wesley himself gave permission for Sarah Mallet to preach, holding her to standards no different than those expected of all Methodist lay preachers.  However, it was a move severely criticized. Tragically, still today, women in ministry face resistance and rejection.  Rather like the eleven in Luke 24:11, who considered the women’s testimony about Jesus’ resurrection “nonsense,” too many of us refuse to hear the good news when proclaimed by a woman.  But by refusing to hear God’s word proclaimed in a female voice, we close ourselves off from God.  May the Lord open our minds and hearts and ears, to receive with joy the witness to our Lord’s death and resurrection that faithful women continue to bring.

I apologize for the missed post last week–a cold and flu intervened.  I will endeavor to post weekly. Thank you for staying with me through this brief hiatus.