I have just come back to work after convalescing from a fall.  I am thankful for all the prayers lifted up on my behalf, and am pleased to report that I am feeling great–though I regret my lengthy hiatus from my work, including this blog.  Rather than delaying these posts any further, and in sorrowful recognition of recent conflicts in Israel and in the West Bank, I am reposting my blog from April 14, 2013, entitled “Whose Land?,”  with prayers for the peace of Jerusalem, and justice for all of God’s people.

The Bible is always in the background of discussions about the land in Palestine.  Jewish settlers in the West Bank, and the American churches and synagogues that support them, sometimes insist that Jews can settle wherever they like, because the land is theirs: promised to them by God.  Just as Abraham and Joshua were told to walk through the land and so claim and possess it (Genesis 13:17; Joshua 1:3; 24:3; compare Ezekiel 36:8-12, where this is applied to those returning from exile in Babylon), so building more and more settlements in the West Bank is for some a way of laying claim to God’s promise.

So, what is God’s promise?   In Genesis 12:1-3, God says to Abraham, “Leave your land, your family, and your father’s household for the land that I will show you. I will make of you a great nation and will bless you. I will make your name respected, and you will be a blessing. I will bless those who bless you, those who curse you I will curse; all the families of earth will be blessed because of you” (Common English Bible).  This promise, repeated in different forms in Genesis 17:7-8 and Exodus 3:16-17, seems fairly explicit.  The land of Canaan—modern-day Palestine—is promised to Abraham and to his descendants. But to whom is the promise given? Deuteronomy 26:1-11 directs that, when presenting the offering of the first fruits gathered in the harvest, the worshipper is to recall the history of God’s kindness to the ancestors, beginning with Abraham: “My father was a starving Aramean” (Deuteronomy 26:5).  In Exodus 3:16-17, God promises the Hebrew slaves in Egypt, “I’ve been paying close attention to you and to what has been done to you in Egypt. I’ve decided to take you away from the harassment in Egypt to the land of the Canaanites, the Hittites, the Amorites, the Perizzites, the Hivites, and the Jebusites, a land full of milk and honey.”  As we discussed in an earlier blog (see “The Bible and ‘The Bible’”, March 13, 2013), Israel is described in Joshua and Judges as a landless and friendless people, to whom the land comes as a gift.  In the Bible, the promise of land is not given to a people securely settled and established: it is an offer of hope to homeless, landless people, without power or property.

Further, while God says, “I will give you and your descendants the land in which you are immigrants, the whole land of Canaan, as an enduring possession” (Genesis 17:8), the promise of possession never involves ownership.  The people of Israel are given the right to live on the land, to farm it and to graze their flocks upon it, but the land itself does not belong to Israel.  This important distinction is emphasized in the laws concerning sabbatical years and jubilees in Leviticus 25 (from a part of the book of Leviticus called the Holiness Code).  According to these laws, every seventh year (the sabbatical year), the land is to be left fallow: the fields are not to be plowed, and no new crops are to be sown.  Then, every 49th year (the seventh seventh year) is to be followed by another fallow year, called the jubilee.  In the year of jubilee, all debts are forgiven, and any land claims revert to the family among Israel’s tribes and clans to whom that particular piece of real estate was originally entrusted, according to Joshua 14:1—19:51.

What this means, in short, is that the land itself could not be bought or sold—not permanently.  All that one could do is rent a property for the number of harvests remaining until the jubilee, when it would return to its properly assigned clan.  Leviticus 25:23 makes this principle explicit: “The land must not be permanently sold because the land is mine. You are just immigrants and foreign guests of mine.”  We do not know if the priestly ideal of the jubilee was ever historically realized.  But the principle it expresses, that the land belongs to the Lord, is consistently upheld in Scripture. 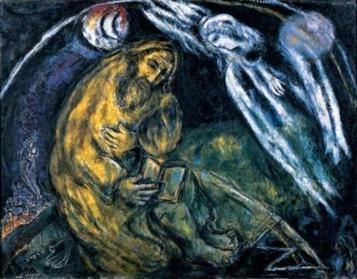 Since the land is and remains God’s, the prophets make it very clear that God’s permission for Israel to live in the land was not absolute.  In Jeremiah 7:3, in response to Jerusalem’s false worship, violence, and injustice, the Lord says, “Improve your conduct and your actions, and I will dwell with you in this place.”  In fact, the Hebrew of this verse could be translated as a plea, expressing God’s longing and love for Israel: “Amend your ways and your doings, and let me dwell with you in this place” (New Revised Standard Version).  God will be in Israel’s midst in the land, and Israel will enjoy the benefits that presence brings, only if Israel worships God rightly, and acts justly.  Similarly, the prophet Ezekiel rejects the claims of violent people who rely on the sword that they shall possess the land (Ezekiel 33:26).  The land is God’s, and its inhabitants will be those whom God permits.

The Lord God’s spirit is upon me,
because the Lord has anointed me.
He has sent me
to bring good news to the poor,
to bind up the brokenhearted,
to proclaim release for captives,
and liberation for prisoners,
to proclaim the year of the Lord’s favor
and a day of vindication for our God,
to comfort all who mourn. . .

For this prophet, “the year of the LORD’s favor” must also be “a day of vindication for our God.”  Sometimes oppressors must be overthrown before real peace can be found; peace without justice is no peace at all.

But when Jesus read from this passage in the Nazareth synagogue, he pointedly dropped that line (Luke 4:18-19) – not because he sided with the oppressors (Romans, in first century Palestine), but because he had come to bring new life to everyone: Jew and Gentile, oppressed and oppressor, alike (Luke 4:25-27; see also Isaiah 66:18-23; Jonah 3–4). 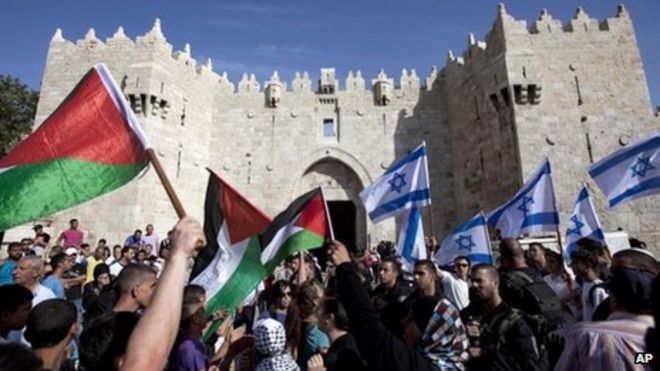 There are, have always been, and will always be hotly contested claims to the land of Palestine.  The modern state of Israel, first established in 1948 in the wake of World War II as a homeland for the dispossessed Jews devastated by Hitler’s holocaust, has a right to exist and thrive.  But the Palestinian Arabs also have a right to live and thrive, in a state of their own (such a state, in fact, was stipulated by the same UN resolution that established the modern state of Israel).  But that discussion is a matter for another day.  For today, my purpose has been simply to address the claim advanced, particularly by American Christians, that the land belongs to the Jews because God gave it to them, while Arabs (Christians and Muslims alike) have no right to the land.  That claim, I would suggest, is not valid.  According to Scripture, the land doesn’t belong to Israel: it never did.  The land is God’s.