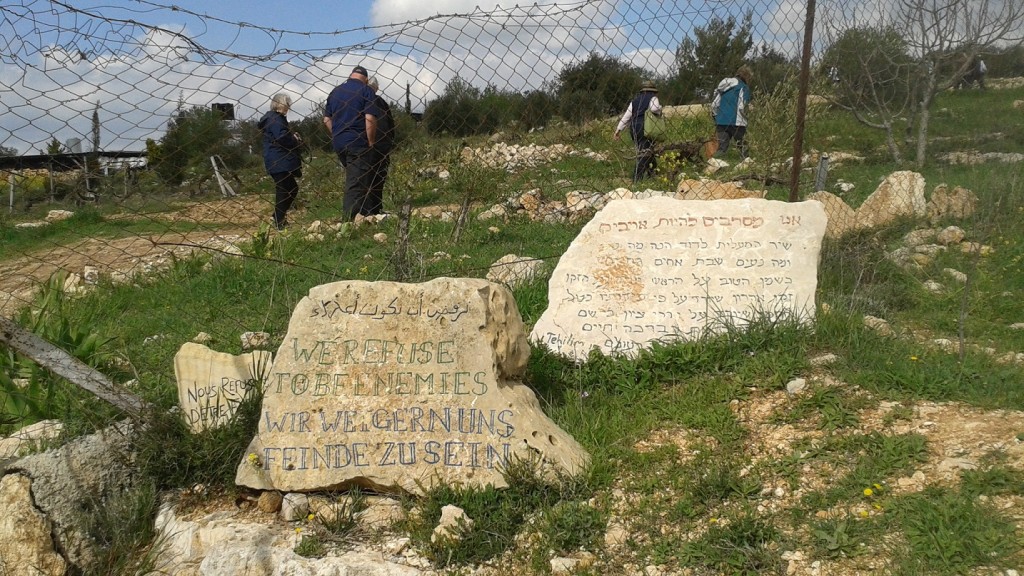 I have used this image before—in advertising for a FOSNA conference at the seminary, and in a previous blog—but this is my photo, taken earlier this month, from my first visit to Tent of Nations and the Nassar farm. I was there with twenty-four other pilgrims, from Pittsburgh Theological Seminary, Westminster Presbyterian in Pittsburgh, and a few Pittsburgh area clergy, on a trip under the auspices of the World Mission Initiative.  This trip was purposively planned to provide support for and engagement with the church in the land of its birth: not only to see the dead stones of ancient holy sites, but to encounter our sisters and brothers in Christ–the living stones (1 Peter 2:5)!

The stones pictured above were placed at the entrance to his family farm by Daoud Nassar, a Palestinian Christian living in the West Bank, southwest of Bethlehem. Although the land has been in his family since 1916, and has been cultivated by them throughout that time, the Nassar family has been in Israeli state courts since 1991, resisting attempts to seize their land for a Jewish settlement.   Daoud and his family host Tent of Nations, a work camp dedicated to fostering peace and understanding among the world’s communities.   The stones declare the purpose of Tent of Nations, and the commitment of the Nassar family to nonviolent resistance, in Hebrew, Arabic, English, and German: “We refuse to be enemies.” 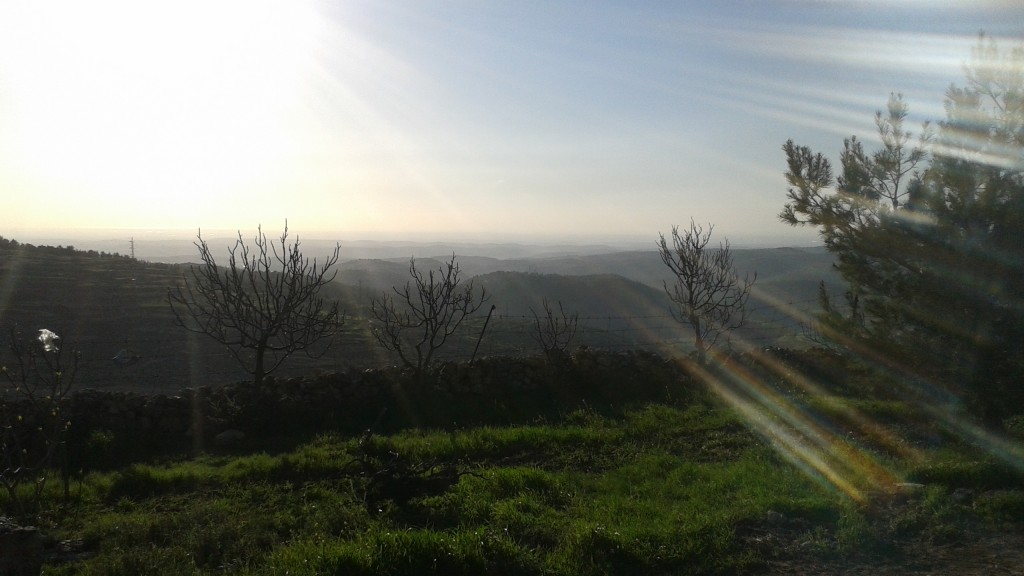 We could not drive to the farm: settlers have blocked the road with heaps of boulders. So after our bus had taken us as close as John, our exceptionally skilled driver, could manage (driving backwards a good bit of the way, as there was no place to turn around!), we hiked the rest of the way. The view across the Judean hills was spectacular! 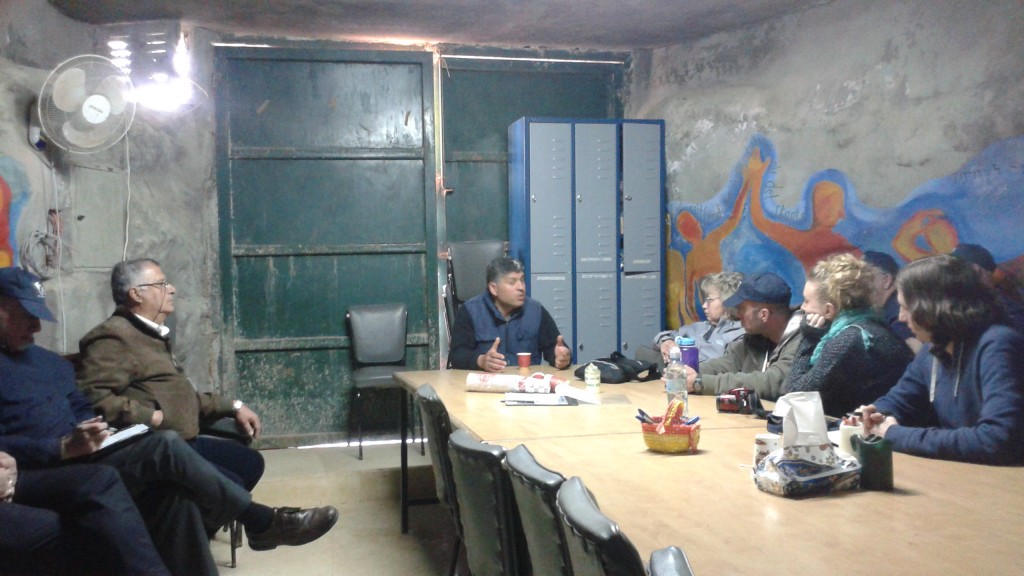 Later, Daoud explained to us the meaning of those stones to him and his family. In response to attempts to take their land from them by force or to seize it through government action, how could they respond as Christians? First, they decided that they could not give in, nor could they remain silent: “We refuse to be victims.” Nor, however, could they respond with force, or violence: “We refuse to be enemies.” I thought of Jesus’ own life and teaching—how he freely healed and taught and fed the hungry, refusing to the very end to return evil for evil, violence for violence. 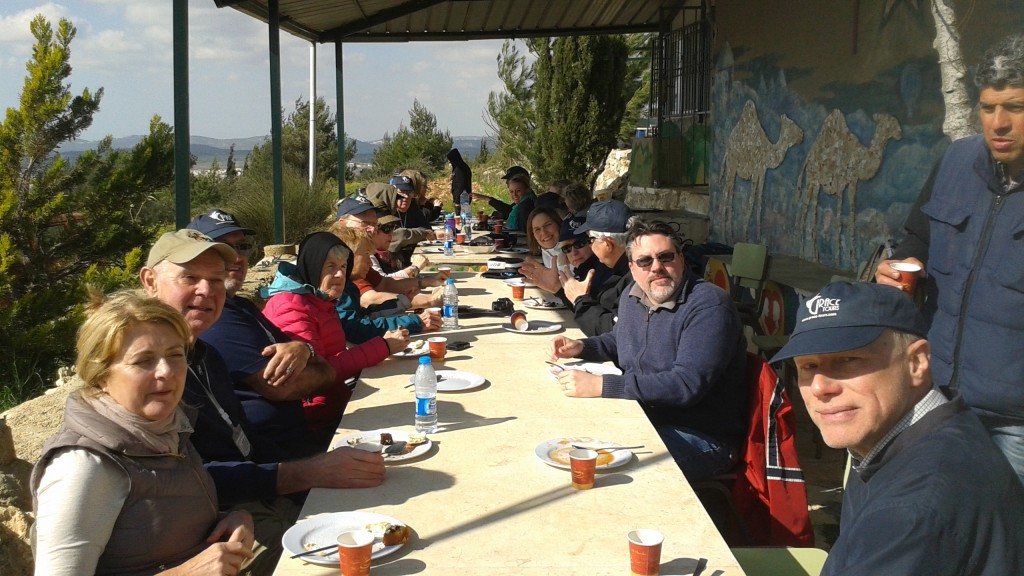 We saw this faith in action. The family had prepared a delicious lunch for us. As we were sitting down to eat, four Israeli soldiers, with weapons at ready, walked up to the farm. We watched and prayed as Daoud walked down to meet them. They talked briefly, and then the soldiers, clearly puzzled, walked away. When Daoud returned, we asked him what had been said. They were curious, he told us, about who we were—specifically, they wondered if we were Israelis, and if so, what we were doing there. He explained to them that we were Christian pilgrims paying fellow Christians a visit. “And then,” he said, “I invited them to lunch.”

That, to me, was the heart of the gospel—expressed simply and profoundly. “We refuse to be enemies” is not a passive stance, but an active one—we will not respond to violence, we will not be intimidated, we will show hospitality and try to be friends. We will, in short, love others as God has loved us. 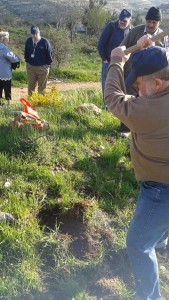 Whole orchards of fruit trees belonging to the Nassars have been bulldozed by settlers claiming that the trees were on their land. So before we left, we planted a few apricot trees. The soil was rocky, the air was cold—I am not sure if the trees will make it. Nor am I sure that Daoud will prevail in this struggle. But I do know that I have met a saint of God—a Christian committed to living his faith, despite circumstances.

On our trip to Israel and Palestine, we spent two nights in the homes of Palestinian Christians in Beit Sahour—the Shepherds’ Field, where, according to tradition, the angels told the shepherds of Jesus’ birth. Today, with Bethlehem and Beit Jalla, Beit Sahour is part of the Christian Triangle, where most of the Christians in the West Bank live and work. Four of us stayed with Abdullah and Nuha Awwad. 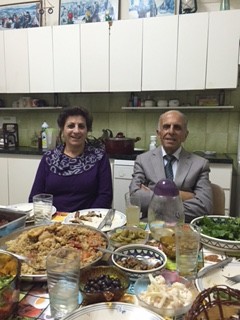 Abdullah’s degree was in English literature, which remains his passion—he will, at the drop of a hat, quote from the Romantic poets, in big hunks! However, he worked for a time as a press secretary to Muammar Gaddafi of Libya, back when many Arabs hoped that Gaddafi might become a unifying leader for Arab peoples. Instead, of course, Gaddafi turned out to be a vicious megalomaniac, as Abdullah learned first-hand when he was imprisoned. Upon his release, he managed to smuggle his family out of Libya, and back home to Palestine.

Abdullah became the headmaster of the Lutheran school in Bethlehem. Nearly everyone we met in Bethlehem and Beit Sahour knew him, we discovered—indeed, many had learned their English from him! While working as an educator, Abdullah became concerned about developmentally disabled persons in Bethlehem, who were sometimes kept in isolation by their own families. He told us of one man whose family, deeply ashamed of him, kept him in a cave with the goats. In 1987, Abdullah founded the Al Basma Special Rehabilitation Centre, “a place where young adults with learning disabilities can go during the day for training in valuable life and work skills.” Today the Centre serves 37 people. “Al Basma,” by the way, means “Smile.” 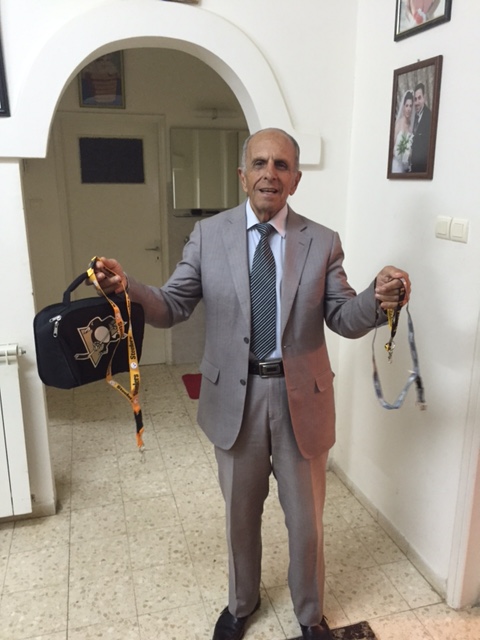 Today, Abdullah is retired for health reasons (he is a survivor of esophageal cancer, and still calls his early diagnosis and treatment a miracle), but still goes every day to the Centre that he founded and loves. His life and work are an illustration and application of Jesus’ teaching: “I assure you that when you have done it for one of the least of these brothers and sisters of mine, you have done it for me” (Matt 25:40, CEB).

Although they are committed Lutheran Christians living a stone’s throw from Jerusalem, Abdullah and Nuha cannot go to the sacred sites there without a special permit—and those are very difficult to come by. Indeed, to travel abroad to see their sons and grandchildren, they need first to go to Jordan. Nuha is from Gaza—her family still lives there. Although, thanks to the internet, they are able to speak regularly, she has not seen them in years—they cannot get out, and she is not permitted to go in. Repeatedly, Abdullah and Nuha asked us to share their story with American friends, and to assure them that they are NOT terrorists! 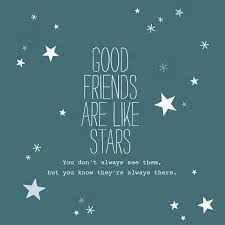 Several times, Abdullah shared with us his motto—he and Nuha have it printed, in many formats, all around their house: “Friends are like stars—you don’t always see them, but you always know they’re there.” I am honored to count a Christian leader like Abdullah as my friend. Being a good friend to him in turn means, at the very least, telling his story.

3 thoughts on “Stories From Palestine”