We call this night not Samhain, but Halloween (that is, Hallow E’en), because October 31 is of course the night before November 1, All-Hallows Day–hence, All-Hallows Eve.  All-Hallows, or All-Saints, Day began in the days of Pope Boniface IV as a feast day for all martyrs, and was first celebrated on May 13, 609.  Pope Gregory III (731-741) shifted the focus from the martyrs to the celebration of all the saints who lack a feast of their own (and by extension, of all who have died in the Lord), and as such All-Saints was declared an official holy day of the church by Pope Gregory IV in 837.  The feast was shifted from May to October 31 in response to the European (specifically Celtic) holiday of Samhain (El Dia de Los Muertos in Spain).

This saying of Martin Luther was used as an epigraph to C. S. Lewis’ famous Christian satire The Screwtape Letters: Letters From a Senior to a Junior Devil–letters of advice from the senior devil Screwtape to his nephew Wormwood, on how Wormwood can tempt his “patient” into hell (an appropriately “Halloweeny” read, to be sure!).  The book is dedicated to J. R. R. Tolkien, the Roman Catholic friend who led Lewis into the Christian faith. That connection is particularly interesting, as some of the same Christians who condemn Hallowe’en as a pagan holiday also mistrust the fantasies of both Lewis and Tolkien, fearful of their alleged “occult” influences–despite the explicitly Christian worldview evident in both the Chronicles of Narnia and The Lord of the Rings.

This being 2016, these waning days of October prompt anticipation, not only of Hallowe’en and All -Saints Day, but also of Election Day on November 8.  The continuing popularity of The Screwtape Letters has prompted the following item, posted on numerous Facebook pages: 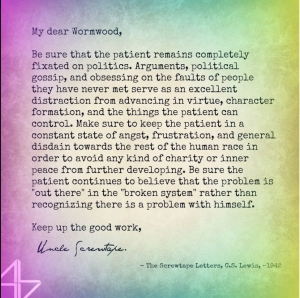 I can understand the frustration with our own current political season that prompted this posting.  However, not only is this not a quote from The Screwtape Letters, or from anything else by C. S. Lewis, it is also a position that Lewis was unlikely to espouse.  To be sure, in The Screwtape Letters, Screwtape does advise Wormwood to get his client thinking obsessively about politics–whether conservative or liberal (“Patriotism or Pacifism”, in Lewis’ World War II English context) doesn’t matter:

Let him begin by treating Patriotism or Pacifism as a part of his religion.  Then let him, under the influence of partisan spirit, come to regard it as the most important part,  Then quietly and gradually nurse him on to the stage at which religion becomes merely part of the “cause” (The Screwtape Letters, letter 7).

However, this does not mean that Lewis believed we should be concerned simply for the salvation of our own souls.  First, while Lewis would certainly agree that sin and salvation are personal, he would certainly not agree that either sin or salvation is private. In fact, so important is the Church that Screwtape advises Wormwood to prevent his patient from attending worship by disillusioning him:

One of our great allies at present is the Church itself. Do not misunderstand me. I do not mean the Church as we see her spread out through all time and space and rooted in eternity, terrible as an army with banners. That, I confess, is a spectacle which makes our boldest tempters uneasy. But fortunately it is quite invisible to these humans.        . . . When he gets to his pew and looks around him he sees just that selection of his neighbors whom he has hitherto avoided. You want to lean pretty heavily on those neighbors. Make his mind flit to and fro between an expression like “the body of Christ” and the actual faces in the next pew. It matters very little, of course, what kind of people that next pew really contains. You may know one of them to be a great warrior on the Enemy’s side. No matter. Your patient, thanks to Our Father below, is a fool. Provided that any of those neighbors sing out of tune, or have boots that squeak, or double chins, or odd clothes, the patient will quite easily believe that their religion must therefore be somehow ridiculous (The Screwtape Letters, letter 2).

Second, Lewis would certainly not agree either that concern for a “broken system” is misplaced, or that trying to fix what is wrong in our world is futile.  The Screwtape Letters was published in book form in 1943, but began as a wartime serial in The Guardian between May and November of 1941–just after the Blitz, a terrible period during which England was under almost continual attack from Nazi Germany.   Indeed, Wormwood’s “patient” is killed by a German bomb:

One moment it seemed to be all our world; the scream of bombs, the fall of houses, the stink and taste of high explosive on the lips and in the lungs, the feet burning with weariness, the heart cold with horrors, the brain reeling, the legs aching; next moment all this was gone, gone like a bad dream. . . Did you mark how naturally–as if he’d been born for it–the earth-born vermin entered the new life? (The Screwtape Letters, letter 31).

Lewis was well aware of the dangers posed by systemic, political evil, and of the responsibility owed by citizens to work for the common good.  Christian faith does not call us to quietism–indeed, loving what God loves will engage us positively and passionately with what God is doing in the world.  If you decide not to vote in this election, or that your involvement cannot make a difference in the world, don’t think to justify your cynicism by appeal to Lewis–though, come to think of it, Screwtape and his ilk likely are involved.  But our Christian faith also reminds us that we, together with all the saints who have gone before us, are part of something larger than this current political season: the Church of Jesus Christ, “spread out through all time and space and rooted in eternity, terrible as an army with banners.”  Happy Hallowe’en, sisters and brothers! 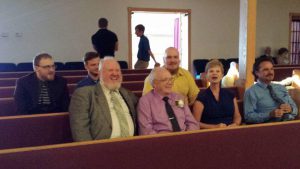 That’s my Dad, Bernard Tuell, sitting next to me in this photo.  I got my laugh and my hairline from my Dad–but also, my love for the Bible and for the Lord.  Hallowe’en is also Dad’s birthday.  So–happy, happy birthday, Daddy.  God bless you, as God has blessed so many through you.