Selecting a Bible is a challenge today, given the number of Bible translations now available.  This is Part 3 of a series of blogs, aimed at helping the reader choose based on the features of each translation, recognizing the weaknesses as well as the strengths of each version.  In our last post in this series (“Which Bible? Part 2,” June 4, 2013), we considered the Revised Standard Version (RSV) and its recent revision, the New Revised Standard Version (NRSV–my personal recommendation for serious study).

The RSV was widely accepted by many Christians, particularly in the so-called “mainline” churches (for example, Methodist, Presbyterian, Lutheran, Episcopalian, United Church of Christ).  But other Christians were disturbed by changes to beloved texts.  Some even went so far as to condemn the translation as heretical, or at least as damaging to the faith.  Bruce Metzger kept on his mantelpiece a block of ash: a burned copy of the RSV that angry protestors had mailed to him!

It was in large measure the desire for a translation deemed more friendly to Evangelical concerns that led to the New International Version (NIV) in 1973.  This translation has undergone further refinements (1978, 1984, 2011), but its fundamental character remains unchanged.   The Preface to the 2011 edition makes this Evangelical Christian commitment clear: “The committee has again been reminded that every human effort is flawed — including this revision of the NIV. We trust, however, that many will find in it an improved representation of the Word of God, through which they hear his call to faith in our Lord Jesus Christ and to service in his kingdom. We offer this version of the Bible to him in whose name and for whose glory it has been made.”

One example of this Evangelical commitment is the translation of the Hebrew word Sheol, which the KJV commonly rendered as “hell.”  Sheol is a place name, referring to the underworld as the place of the dead (for example, see Psalm 139:8 in the NRSV). This of course doesn’t quite jibe with Christian ideas about the afterlife. So until the 2011 edition, the NIV translated this word, in nearly every instance, as “the grave”–though Sheol never appears with the article (the word “the”), and rarely occurs in narratives about death and burial.

Another example of translation guided by ideology, rather than simply by grammar, is found in John 3:1-21: Jesus’ conversation with the Pharisee Nicodemus.  The KJV of John 3:7 reads, “Marvel not that I said unto thee, Ye must be born again.” This verse is a mainstay of Evangelical preaching–the basis of many an altar call as a summons to experience a new birth as a child of God.  The Greek word anothen, rendered “again” in the KJV, can mean either “again, anew” or “from above.”  Likely this passage intends both: Jesus describes a life in the Spirit (“from above;” see John 3:5-8), so different from the previous life as to be a fresh start–a new birth (which is why Nicodemus gets confused; see John 3:4).  But this pun is not possible in English, forcing translators to choose how best to render the word.

all the days of my life,

and I will dwell in the house of the LORD forever.

The only differences from the KJV are the use of “love” instead of “mercy” for the Hebrew khesed (see “Which Bible? Part 2”), and the specification that it is God’s goodness and love that follow me–assumed, but not stated in the Hebrew.

The NIV is easier to read than the NRSV, assuming a high school reading level.  Its translation is generally sound, as long as the reader stays aware of this version’s Evangelical bias.

In recent years, the English Standard Bible (ESV, 2001) has taken pride of place among many Evangelicals.  On their website, the ESV’s publishers state that their translation “provides the most recent evangelical Christian Bible scholarship and enduring readability for today. The ESV translation process itself was based on the trusted principles of essentially literal translation, which combines word-for-word accuracy with readability and literary excellence.”

However, much like the RSV, the ESV stands in the KJV tradition, and tries to preserve its language and rhythms.  So, the ESV of Psalm 23:6 is the same as the RSV, except that a footnote on “mercy” reads “steadfast love,” and an added note on “dwell” reads “return to dwell.”  The latter note recognizes that the Hebrew text is uncertain: the word weshabti could be (and most commonly has been) read as an unusual form of the Hebrew word meaning “dwell” (yashab), but the simplest way to read the Hebrew would be as “I will return.”

Much like the NIV, the ESV has a clearly stated Evangelical bias. But taking that into consideration, the translation is generally sound, and often (as in Psalm 23:6) interesting.

For the Hebrew Bible, one of the most interesting and beautiful English translations available  comes from the Jewish Publication Society (JPSV 1985, 1999).  This translation of the Tanakh (an abbreviation for Torah [Law], Nebi’im [Prophets], and Kethubim [Writings], the three parts of the Hebrew Bible) is intended for Jewish readers.  It stays with the Hebrew text as closely as possible (a problem in those cases where the versions may preserve a better reading), and has been attentive to good English as well as good scholarship (Jewish novelist Chaim Potok was on the translation team!).  I strongly recommend this Bible, especially the Jewish Study Bible edition pictured above, edited by Adele Berlin and Marc Zvi Brettler.  The introductions and footnotes are by Jewish scholars, and make use of the sayings and teachings of the rabbis.  Christian readers will find that, as the rabbis ask different questions than they do, new insights into the text open up.

Only goodness and steadfast love shall pursue me all the days of my life, and I shall dwell in the house of the LORD for many long years.

Particularly striking is the rendering of Hebrew radaph as “pursue” rather than simply as “follow.”  This is not only accurate (radaph is what predators do to prey, or victors to the vanquished!), but evocative and interesting.

In next week’s post, we will finish this series by looking at the Common English Bible, a very easy to read translation, and paraphrases, particularly Eugene Petersen’s The Message.  See you then.

The Bible Guy congratulates the newly-ordained 2013 class of elders in the Western Pennsylvania Conference of the United Methodist Church: 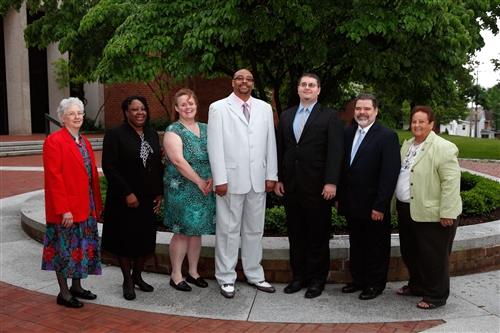 Also to be congratulated are those approved as provisional elders:

God bless you all richly in this new phase of the ministry to which Christ has called you!  And to the PTS students: it was and is my joy and privilege to be your teacher.