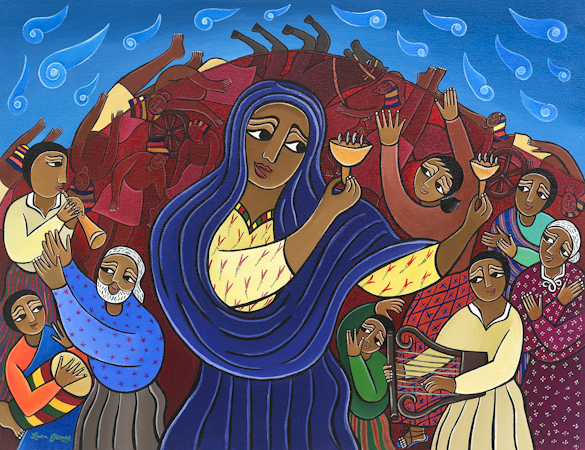 “When the horses of Pharaoh with his chariots and his chariot drivers went into the sea, the Lord brought back the waters of the sea upon them; but the Israelites walked through the sea on dry ground. Then the prophet Miriam, Aaron’s sister, took a tambourine in her hand; and all the women went out after her with tambourines and with dancing.  And Miriam sang to them: ‘Sing to the Lord, for he has triumphed gloriously; horse and rider he has thrown into the sea.’ Then Moses ordered Israel to set out from the Red Sea” (Exod 15:19-22).

Based on the archaic form of Hebrew found in Exodus 15:1-18, this poem is the oldest passage in Scripture, having been fixed in written form by the eleventh century BCE. This is important: we need to hear this song, not from the perspective of a strong and self-confident Israel, but of an Israel in its infancy—a people fragile and vulnerable, who had until very recently been no people, hanging on to survival by their fingernails. Otherwise, we may use the image of God as a warrior, sweeping away God’s enemies, to justify our own arrogant, bullying behavior. Jewish tradition did not read this passage as legitimating hatred toward those we regard as our enemies. According to the Talmud (the authoritative collection of the teachings of the rabbis), when the Israelites began to celebrate the defeat of the Egyptians, God asked, “How can you sing as the works of my hand are drowning in the sea?” (b. Megillah 10b).

Another point we may miss in this account of God’s deliverance is that the songleader is Moses’ sister, identified as “the prophet Miriam.” Miriam is not the only woman identified as a prophet in the Hebrew Bible: so are Deborah, who is also called a judge—that is, a leader in Israel in the days before kings (Judges 4:4), and Huldah, who confirms that the book of the law discovered in the temple in Josiah’s day is divine word (2 Kgs 22:14-20). A feminine form of the word “prophet” is used in the Hebrew for grammatical reasons, but it would be a mistake to translate the word as “prophetess,” implying that these women belonged to some sort of women’s auxiliary! Miriam was a prophet, just as Moses was; just as Isaiah, Jeremiah, Amos and Micah were. Like them, Miriam was a spokesperson of God, and the song that she led was, and is, a word from God. In our next two devotionals, we will chase this idea through other texts, in order to refute any nonsense about “political correctness” here. The Bible is clear on Miriam’s prophetic role. The question is, what will we do with this word?

Prayer: Thank you, God, for your including us in your community. Forgive us for turning the good news of that inclusion into an excuse for excluding others. Help us to hear your good news with joy, whether it is proclaimed by a Miriam or by a Moses. Through Jesus, whose ministry was supported by women “who provided for [him] out of their resources” (Luke 8:3), Amen.