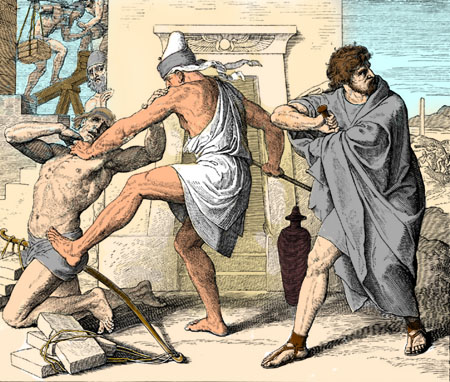 “One day, after Moses had grown up, he went out to his people and saw their forced labor. He saw an Egyptian beating a Hebrew, one of his kinsfolk.  He looked this way and that, and seeing no one he killed the Egyptian and hid him in the sand.  When he went out the next day, he saw two Hebrews fighting; and he said to the one who was in the wrong, ‘Why do you strike your fellow Hebrew?’  He answered, ‘Who made you a ruler and judge over us? Do you mean to kill me as you killed the Egyptian?’ Then Moses was afraid and thought, ‘Surely the thing is known.’  When Pharaoh heard of it, he sought to kill Moses” (Exodus 2:11-15).

Scripture and history are full of accounts of people acting to force God’s hand—and it never ends well. The Israelites attempted to claim the land of promise too soon, and were driven back (Num 14:40-45); they presumptuously carried the ark into battle without consulting the Lord, and were defeated (1 Sam 4:1-10). In 1524, German peasants inspired by the preaching of Thomas Müntzer believed that they could bring in the kingdom of God by taking up arms against their lords—and 100,000 of them died.

Moses’ murder of an Egyptian overseer may be an understandable response to cruel oppression, but it is not excusable. Surely if the cross teaches us anything, it is that God’s way is not the way of violence. Jesus did not come to lead an armed rebellion, imposing his will upon the world by force. Instead, he told his followers, “whoever wishes to become great among you must be your servant, and whoever wishes to be first among you must be slave of all. For the Son of Man came not to be served but to serve, and to give his life a ransom for many” (Mark 10:43-45).

Prayer: O patient and compassionate God, help us to wait upon you, in patience and in confidence. But never let us turn that waiting into an excuse for inaction. Show us how to represent your kingdom in our world, without thinking that we can bring in your kingdom by our action, and without succumbing to despair when our efforts seem unfruitful. Through Jesus our Christ, who was rejected by those he came to save, Amen.