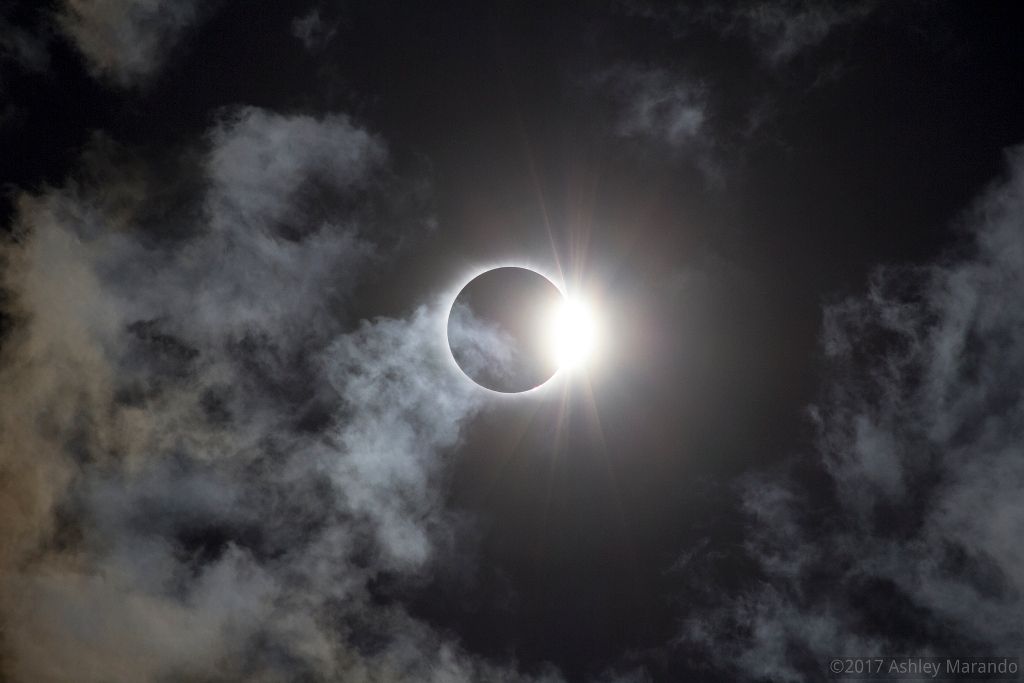 Last Monday, August 21, Wendy and I were in Bowling Green, Kentucky for the solar eclipse.  A solar eclipse happens whenever the moon passes between the earth and the sun, so that the moon’s shadow falls on the earth.  Eclipses are not unusual–one happens somewhere on the earth’s surface ever 18 months. But this was the first total eclipse visible all across the continental United States since June 8, 1918.

Total eclipses are a minor miracle.  The earth is just far enough from our sun, and our moon is just large enough and just far enough away from us, that the moon and sun have about the same apparent size in the sky.  This means that, from our perspective, the moon can entirely block the sun’s disk, making visible the wispy corona surrounding our star. This is not always the case: since the moon orbits our planet in an ellipse rather than a circle, its apparent size at its furthest distance from us is slightly smaller than our sun.  An eclipse in those circumstances results in a thin ring of sunlight visible all around the dark lunar disk–an annular eclipse (this picture is by Kevin Baird, copyright 2012) like the one I remember viewing with a pinhole camera in West Virginia May of 1994.

The photo of the 2017 eclipse at the head of this blog was not taken by us.  It is from NASA’s Astronomy Picture of the Day site, and was taken in South Carolina, right in the center of the band of totality–that is, the area entirely within the moon’s shadow–that on August 21 crossed the continental United States, from Oregon to South Carolina.

Where we were–in the band of totality, but not at its center–the experience was different.  We watched through our viewers as the moon advanced across the sun’s disk, from a wee bite off the upper right edge until the moon’s disk entirely covered the sun.  Although the sky was mostly clear, the sunlight faded, as on an overcast day, until the world became. . . not dark, but twilit–like early evening.  It had been a hot summer day, but the air became cool.   During the minute and a half or so of totality, when we could look up with unprotected eyes, the sun was a dark black circle–like a hole in the sky.  The corona was far brighter than I had expected: a ring of brilliant white fire.

My attempts at amateur photography failed to capture what we saw at all–but as the moment of totality passed, the gaps between the leaves of the tree under which Wendy and I were sitting acted as natural pinhole cameras, refracting images of the crescent sun onto our lawn chairs: 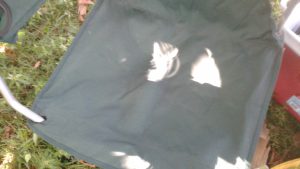 So–why am I, a self-styled Bible Guy, blogging about this?  Most of the time, we can comfortably live as though we are at the center of the universe.  The eclipse was a vivid reminder that we are not:  that the universe is far larger, stranger, and more wonderful than our day-to-day experience may lead us to believe.

Ancient people of course also experienced eclipses, and so it should be no surprise that these awesome events are described in Scripture.  The title of this blog comes from the King James Version of Revelation 6:12:

And I beheld when he had opened the sixth seal, and, lo, there was a great earthquake; and the sun became black as sackcloth of hair, and the moon became as blood. . .

The “moon became as blood”  describes another, more commonly observed event, when the moon passes into the shadow of the earth: a lunar eclipse. 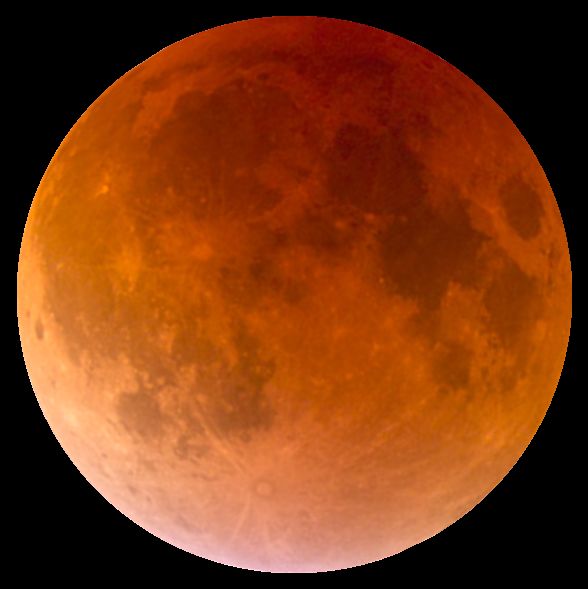 Although ancient people did not know what caused lunar and solar eclipses, they certainly knew that these events never happened in conjunction.  So the sun becoming “black as sackcloth” and the moon becoming “as blood” could only mean an undoing of the fundamental laws of creation.  John in Revelation draws on a stock of images of the coming day of the LORD, particularly Joel 2:30-31 (3:3-4 in Hebrew):

I will give signs in the heavens and on the earth—blood and fire and columns of smoke. The sun will be turned to darkness, and the moon to blood before the great and dreadful day of the LORD comes.

This image is also found in the Gospel pronouncements concerning the end:

In those days, after the suffering of that time, the sun will become dark, and the moon won’t give its light. The stars will fall from the sky, and the planets and other heavenly bodies will be shaken (Mark 13:24-25; see also Matt 24:29; Luke 21:25).

Another, more surprising reference to the eclipse comes from James 1:17:

Every good gift, every perfect gift, comes from above. These gifts come down from the Father, the creator of the heavenly lights, in whose character there is no change at all.

While the Common English Bible catches the sense of this passage, it obscures some subtleties in the language.  First, God is addressed in this passage as patros ton photon: literally “the Father of lights” (see the NRSV and KJV of this verse).  The reference is likely to Genesis 1:14-19, where God populates the sky dome with lights–both the greater lights of the sun and moon, and the lesser lights of the stars.  Hence, the CEB unpacks the Greek phrase as “the Father, creator of the heavenly lights.”

This astronomical image of God continues in the following phrase: par’ ho ouk eni parallage he tropes aposkiasma.  Here, the CEB paraphrases to capture the point of this image: God does not change, but is the constant and dependable source of “every good gift.”  The KJV renders more literally, in a way that captures the astronomical reference: “with whom is no variableness, neither shadow of turning.”  The stars change as the heavens turn above us.  Indeed, the ancients knew well not only that the stars varied in brightness and color (see 1 Cor 15:31), but that some individual stars varied in brightness over time; that new stars, as well as meteors and comets, could sometimes appear; and that the planets (from the Greek word for “wanderer”) followed their own quite distinct courses through the cosmos.  Unlike the lights, then, God their Father is constant!  But the expression he tropes aposkiasma (literally, “nor of turning a shadow”) is particularly intriguing.  I believe that it describes the eclipse.  The moon may wax, or wane, or turn blood-red, and the sun itself may dim, and even disappear–but God’s love and goodness cannot be eclipsed!  As the apostle Paul wrote,

I’m convinced that nothing can separate us from God’s love in Christ Jesus our Lord: not death or life, not angels or rulers, not present things or future things, not powers or height or depth, or any other thing that is created (Rom 8:38-39).

While we were in Kentucky, we learned that my Dad’s sister, Barbara Ann Tuell, had died.  We were privileged to celebrate her life at her funeral at Big Tygart UMC, our home church.  The following memorial was written by Kim Currence Yeager, whom Barbara raised, and who cared for Barbara lovingly and faithfully through her long illness.  Thank you, Kim–and may light perpetual shine upon you, Aunt Barb!

Barbara Ann Tuell, 80, of Mineral Wells, went home to be with Jesus, on Sunday, August 20, 2017, surrounded by her loving family.

She was born July 9, 1937 in Parkersburg, the daughter of the late Robert and Vida Tuell.

She was known as Grammy, to her grandson Clayton, who she always said was her reason for fighting so hard during this long battle with cancer. She loved spending time with family and truly dedicated her life to loving and caring for them. God used her selfless, giving and gentle heart to impact their lives in a tremendous way.

She is survived by her chosen daughter who she raised from the age of seven, Kim Yeager and husband Todd and their son Clayton Reese, who she lived with; her brother, Bernard Tuell and nieces and nephews, Tammy Parker, Steven Shawn Tuell, Tracey Dent and Dee Dee Nichols. She also will be greatly missed by her best friend, Mildred Oldaker, and Kim’s brother, Alan Currence.

In addition to her parents and infant sister, she was preceded in death by her sister-in-law, Mary Tuell and Kim’s parents, Marvin and Wilodene Currence.

Her family would like to sincerely thank Dr. Kelli Cawley, Marsha McCullough and the staff at Strecker Cancer Center for all the compassionate care and kindness they provided, also to Nicole and Amedisys Hospice for comfort in these last days.

“I have fought the good fight, I have finished the race and I have kept the faith.” 2 Timothy 4:7.