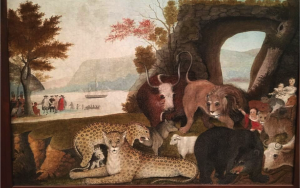 From 1820 until his death in 1849, the Quaker preacher and American folk artist Edward Hicks painted the same scene over and over again: at least 62 times in all!  Likely you have seen at least one of these paintings; the one depicted above comes from the Carnegie Museum of Art in Pittsburgh. In each painting, little children stand solemn, unmenaced, and unafraid among lions, wolves, and bears, accompanied by equally unfazed sheep and cattle. Each face, human and animal, gazes calmly out of the canvas, meeting our eyes in serene invitation. To each painting, Hicks gave the same title: “The Peaceable Kingdom.”

The wolf will live with the lamb,
and the leopard will lie down with the young goat;
the calf and the young lion will feed[a] together,
and a little child will lead them.
The cow and the bear will graze.
Their young will lie down together,
and a lion will eat straw like an ox.
A nursing child will play over the snake’s hole;
toddlers will reach right over the serpent’s den. 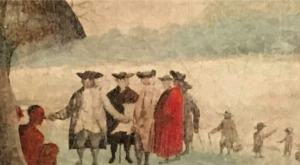 Often, in the background of these paintings, Hicks depicted William Penn making a treaty with the Lenni Lenape Indians in  1682 (see the detail above). But why?  What does this have to do with Isaiah’s vision of the peaceable kingdom?  To answer that question, we need to look more closely at Isaiah 11.

This passage seems to be set in the mid-8th century BCE: after the depredations of the Syro-Ephraimite War in Judah, and the fall of Israel and deportation of its people (722 BCE).  In the wake of these tragedies, Isaiah describes his people as a tree chopped down to its roots.  But still, there is life in the stump!

A shoot will grow up from the stump of Jesse;
a branch will sprout from his roots (Isa 11:1). 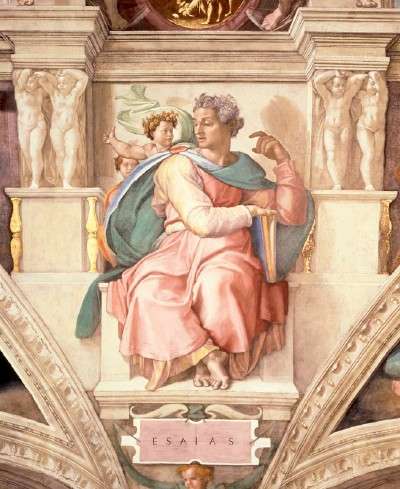 Isaiah’s vision of Judah’s resuscitation is also a vision of the renewal of kingship. Jesse was the father of David, ancestor of Judah’s kings (see Ruth 4:17–22).  This passage sets forth the prophet’s hope for just rule: his idealistic vision of what the king should be, and one day would be;

The Lord’s spirit will rest upon him,
a spirit of wisdom and understanding,
a spirit of planning and strength,
a spirit of knowledge and fear of the Lord.
He will delight in fearing the Lord.
He won’t judge by appearances,
nor decide by hearsay.
He will judge the needy with righteousness,
and decide with equity for those who suffer in the land.
He will strike the violent with the rod of his mouth;
by the breath of his lips he will kill the wicked.
Righteousness will be the belt around his hips,
and faithfulness the belt around his waist (Isa 11:2–5).

For Isaiah, just government in the social realm reflects divine order in the natural realm (see Psalm 19), and so he dreams of a world in which nature reflects God’s intent for creation perfectly.  The peaceable kingdom of Isa 11:6–9 alludes to the priestly account of creation in Genesis 1:1–2:4a, and especially to Gen 1:29–30:

Then God said, “I now give to you all the plants on the earth that yield seeds and all the trees whose fruit produces its seeds within it. These will be your food.  To all wildlife, to all the birds in the sky, and to everything crawling on the ground—to everything that breathes—I give all the green grasses for food.” And that’s what happened.

In this account, there are neither predators nor prey in the world as God would have it be–nothing needs to die for something else to live. As Isaiah’s vision has it, “The cow and the bear will graze. . . and a lion will eat straw like an ox.”  Although his vision comes from a time of devastation and despair, for Isaiah despair at God’s punishment always yields to hope, for God’s judgment is always tempered by mercy.

The last verse of this passage looks out to the nations–as the Quaker painter realized:

On that day, the root of Jesse will stand as a signal to the peoples. The nations will seek him out, and his dwelling will be glorious (Isa 11:10).

That is why Hicks places William Penn and the Lenni Lenape in his depiction of Isaiah’s peaceable kingdom.  God’s peace and justice are not the property of any one nation or race, but are given to unite the whole world.  Further, Hicks believed that Isaiah’s vision was more than a dream for someday. He saw the treaty with the Lenni Lenape as evidence that God was already at work in the world, bringing God’s peace and justice to fruition here and now.  Hicks heard that hope in the account of Isaiah’s vision. 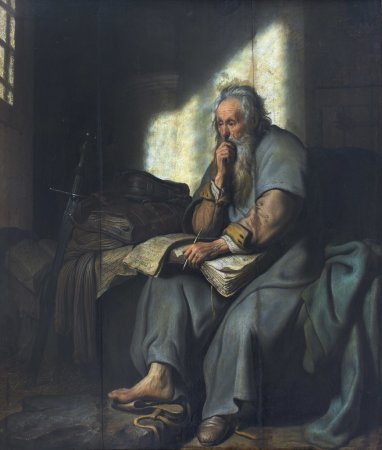 Paul heard it, too! For this apostle to the Gentiles, Isaiah’s vision demonstrated that God’s grace extends beyond the borders of Israel.  In Rom 15:12, Paul quotes that same verse (it sounds a bit different, as Paul is quoting from the Greek translation of that passage):

There will be a root of Jesse,
who will also rise to rule the Gentiles.
The Gentiles will place their hope in him.

For Paul, of course, the branch from the root of Jesse is Jesus, who has fulfilled Isaiah’s dreams of what a king should be, and who comes, as Isaiah envisioned,  to all peoples.

Romans is an unusual epistle.  Usually, Paul wrote to churches he had established himself or had already visited, responding directly to the circumstances and concerns of each particular community.  But at the time he wrote to the Romans, Paul had never been to Rome (see Rom 1:8-15). Why then did he write this letter, to people he had never met?

New Testament scholar Robert Jewett proposes that Paul wrote Romans as an ambassador for Christ, seeking to reconcile the estranged gentile (non-Jewish) and Jewish Christian communities in Rome.  So, Paul begins that letter by asserting his confidence that Jesus has come to and for Jew and Gentile alike:

I’m not ashamed of the gospel: it is God’s own power for salvation to all who have faith in God, to the Jew first and also to the Greek (Rom 1:16)

He returns to this theme toward the end of Romans:

So welcome each other, in the same way that Christ also welcomed you, for God’s glory. I’m saying that Christ became a servant of those who are circumcised for the sake of God’s truth, in order to confirm the promises given to the ancestors, and so that the Gentiles could glorify God for his mercy (Rom 15:7-9).

Paul is persuaded that the Gospel is for all people:

May the God of endurance and encouragement give you the same attitude toward each other, similar to Christ Jesus’ attitude. That way you can glorify the God and Father of our Lord Jesus Christ together with one voice (Rom 15:5-6).

The NRSV reads, “May the God of steadfastness and encouragement grant you to live in harmony with one another, in accordance with Christ Jesus.” In this second week of Advent, our attention is drawn to John the Baptist, the forerunner of the Christ.  John famously baptized all comers, all who repented of their sins.  He reminded the religious leaders, so proud of their distinct heritage, that God could raise children of Abraham from the stones (Matt 3:9)!  The gospel is not the property of any nation, or race, or group, but is given to the whole world.

Jurgen Moltmann, whose famous theology of hope had its beginnings when he was a German POW in England, warns Christians not to be seduced by nationalism:

Moltmann’s warning comes from grim experience: he saw first-hand in Nazi Germany the destructive consequences of the church allied with a state defined by exclusion.  Jewett as well is persuaded that we must heed Paul’s call to reconciliation:

The Pauline hope of unification of all peoples through the gospel of transforming love that produces respect between groups as diverse as the Jews and Gentiles urgently needs to be placed on our agenda (Robert Jewett, “The Law and the Coexistence of Jews and Gentiles in Romans,” Interpretation 39 [1985]: 341).

Although Jewett wrote those words 34 years ago, they could have been penned this morning.  I cannot remember a time in my life when we more needed to hear “the gospel of transforming love that produces respect between [diverse] groups”!  True, the divisions that tear at the church today are not the same as those that Paul addressed, but still, the point remains.  In the Peaceable Kingdom that Isaiah saw, Paul preached, and Hicks painted, predators and prey—natural enemies!—sit peacefully together: and so must we. 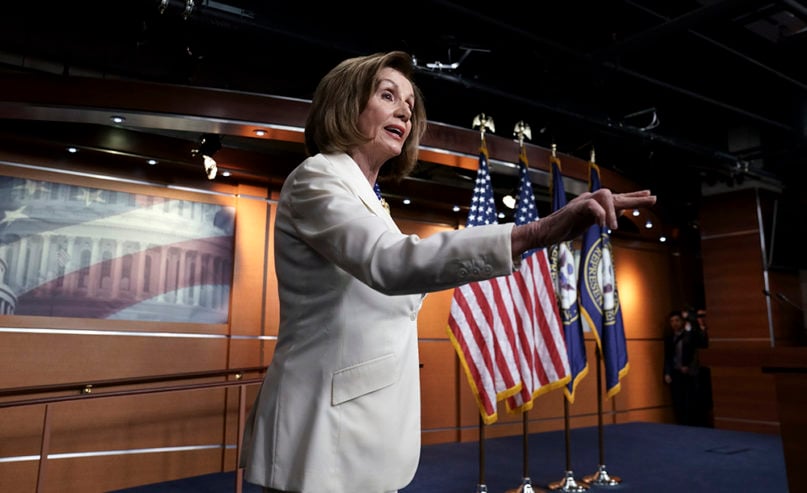 In a press conference this past week, Speaker of the House Nancy Pelosi was asked if she hated President Trump.  She responded, “I don’t hate the president. I pray for the president all the time. . . I was raised in a Catholic house. We don’t hate anybody, not anybody in the world.”  Many scoffed at those words, but that surely is the point of these Scriptures. We don’t have to agree—we do need to respect one another, to will one another’s good, and to pray for one another–at least, if we want to be a part of what God is doing in our world.  For God is in the business of overcoming our division, and uniting us in God’s love, justice, and peace.  To paraphrase Paul, “May the God of steadfastness and encouragement grant us to live in harmony with one another, in accordance with Christ Jesus.”