FOREWORD: The feast day of St. Nicholas of Myra is December 5/6 in the Western Church and December 19 in Eastern Churches.  We celebrated the saint in chapel at Pittsburgh Theological Seminary on December 10, with a service built around the sketch below by senior PTS student Joshua Demi, printed here with his permission.  The liturgist was Dr. Helen Bleier, Santa was portrayed by my first-year advisee Tom Harrison, who is (no wonder!) a professional Santa, and Nicholas was portrayed by me.  The pictures below were taken by another PTS student, Rebecca Young, who gave permission for me to use them.  Thanks to all of you!

According to the Catholic Encyclopedia, St. Nicholas was

Bishop of Myra in Lycia; died 6 December, 345 or 352. Though he is one of the most popular saints in the Greek as well as the Latin Church, there is scarcely anything historically certain about him except that he was Bishop of Myra in the fourth century.

Some of the main points in his legend are as follows: He was born at Parara, a city of Lycia in Asia Minor; in his youth he made a pilgrimage to Egypt and Palestine; shortly after his return he became Bishop of Myra; cast into prison during the persecution of Diocletian [284 to 305 CE], he was released after the accession of Constantine [306 to 337 CE], and was present at the Council of Nicaea. 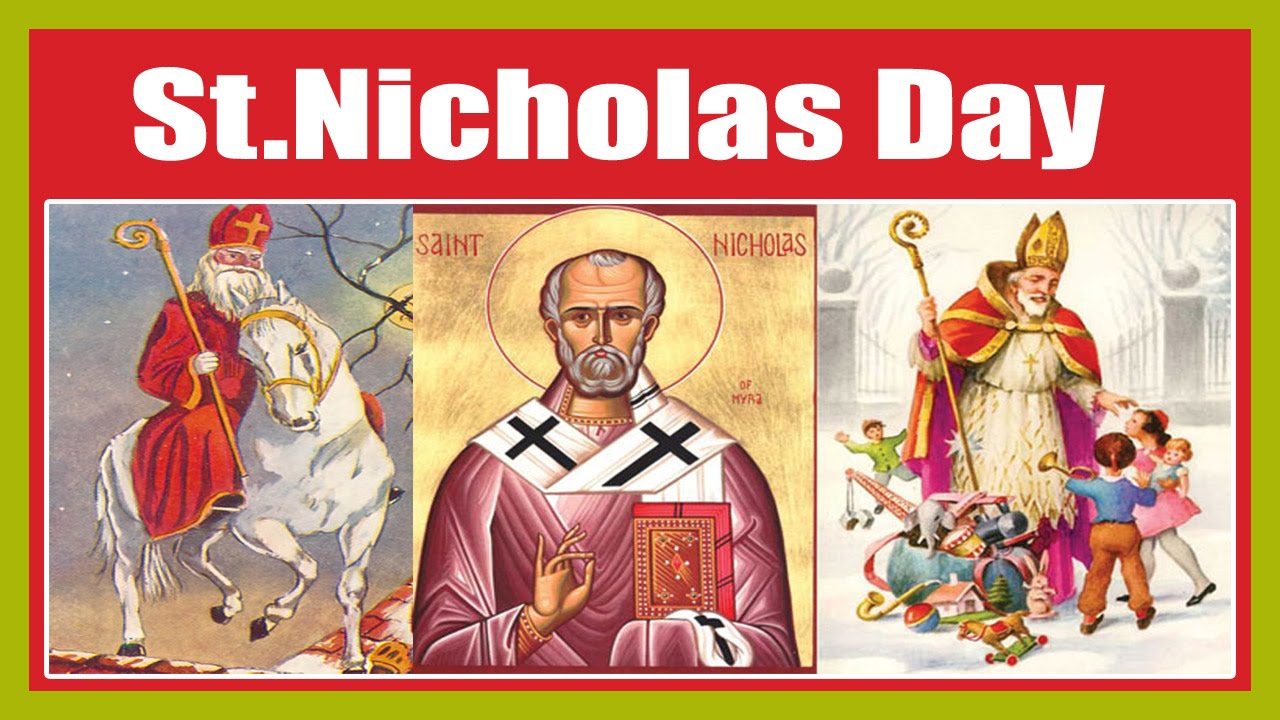 Note that part of the legend was that Nicholas punched out Arius at the Council of Nicaea for denying the full divinity of Christ!  Legend also connects St. Nicholas to gift-giving at Christmas, and specifically to hanging stockings.

LITURGIST: Today is the feast of St. Nicholas, the liturgical traditions celebrate the life and legacy of St. Nicholas, the fourth century bishop of…
(SANTA enters from the wings. He proceeds to hand out treats and do his thing. This section is intentionally left open to give the actor playing Santa some creative freedom.)
(The doors of the worship space slowly swing open and a robed and bearded figure NICHOLAS enters, carrying a large bound Bible [perhaps the Bible from the pulpit which has been mysteriously absent until now?]. As he enters, a hush of silence comes over SANTA. As NICHOLAS passes the font, he genuflects and makes the sign of the cross, staring intently at the cross on the opposite side of the wall. Paying no mind to anyone, he walks to the front row, sits down, and begins to pray silently. SANTA regains his composure and then continues.)

NICHOLAS: (genuinely confused) Excuse me. What is going on?
SANTA: I’m jolly olde St. Nick. I came all the way from the North Pole to spread some Christmas cheer.
NICHOLAS: Oh my.
SANTA: Well, at least I think I am. I stopped by the mall the other day to buy some tube socks, saw myself, and had a bit of an identity crisis.
NICHOLAS: You are most certainly not Saint Nicholas. Yet, I can see it. You are a symbol, like a half-faded memory of me, the memory of a child, bits of reality filtered through the lens of fantasy and fairytales. But I am so much more than this. I lived at a time of great social upheaval and theological divide. I was imprisoned for worshiping Our Lord, and I saw the great persecution come to an end. I stood against heresy, perhaps a bit too vigorously at times. I didn’t give to spread Christmas cheer; I gave because I saw their need. I gave because I had been given much. I gave everything I had, everything I was, to reflect the love of God back into the world, albeit with whatever a dim and cracked a mirror I could.

(NICHOLAS approaches the pulpit, and opens his massive Bible)
NICHOLAS: The Gospel of Our Lord According to St. Luke, Chapter 6, verses 17-23:

He came down with them and stood on a level place, with a great crowd of his disciples and a great multitude of people from all Judea, Jerusalem, and the coast of Tyre and Sidon. They had come to hear him and to be healed of their diseases; and those who were troubled with unclean spirits were cured. And all in the crowd were trying to touch him, for power came out from him and healed all of them.

Then he looked up at his disciples and said:

“Blessed are you when people hate you, and when they exclude you, revile you, and defame you on account of the Son of Man. Rejoice in that day and leap for joy, for surely your reward is great in heaven; for that is what their ancestors did to the prophets [NRSV].

The time is coming, and may have already come, when love will be met with hate, when good will be met with evil, when you will weep with those who weep and everything within you will cry, “Enough! I can take no more of this.” When this time comes, remember, blessed are you who weep, for you will laugh. Let your love be great, for great is The One who loves you. Let your gifts be great, for greatly have you been given. And remember, your Beloved, the one who was, and is, and is to come, God of God, Light of Light, very God of very God, is with you always, even unto the end of the age.
(NICHOLAS leaves the pulpit, and goes to leave, passing the font, genuflecting and making the sign of the cross, starring intently at the cross as he did before.)

SANTA: Wait, do you have to go?
NICHOLAS: Yes, for I too am but a memory, albeit a slightly clearer one. I am the feeble attempt of a few modern minds to capture the message of a life long gone to glory. Why don’t you come with me? I would love to hear more about this North Pole of yours. One can learn a great deal from the wisdom of children.
(SANTA exits with NICHOLAS. As they exit, SANTA excitedly tells NICHOLAS about the North Pole. NICHOLAS humors him as a loving parent humors a child.)