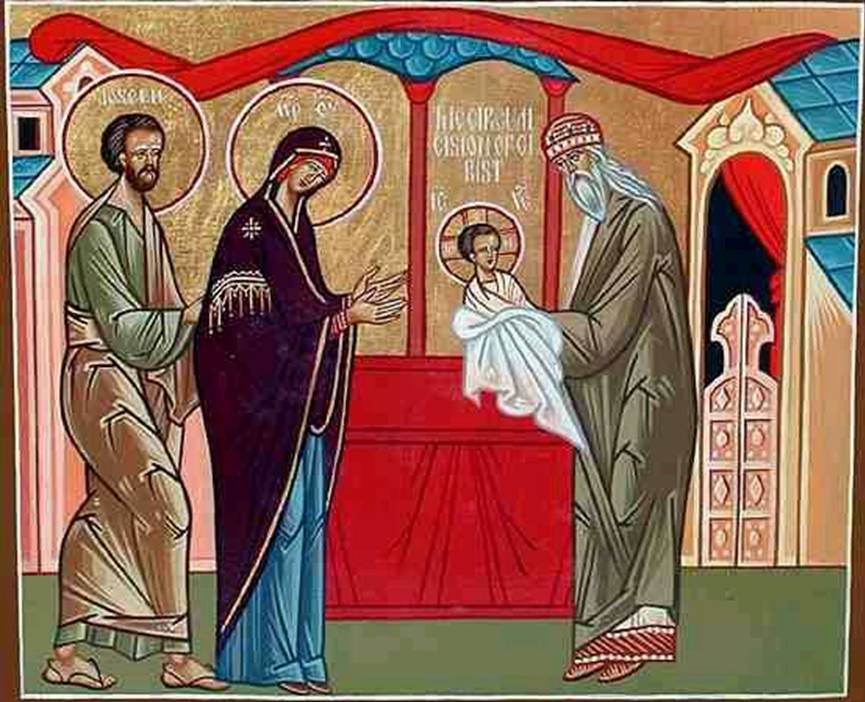 Today, of course, is New Year’s Day–a day for rededication and new beginnings.  But it is also the eighth day of Christmas , and so according to Luke 2:21, the day when Jesus was circumcized (see Lev 12:3) and named.  Therefore in many traditions, this day is the Feast of the Holy Name of Jesus.

Before reflecting on what the name is, it is important first to note what the name is not.  “Christ” is not Jesus’ last name–he was not the son of Joseph and Mary Christ!  Rather, Christ is a title—and a rather odd one.  In Greek, christos means “smeared” (the Greek geographer Diodorus Siculus, for example, refers to newly plastered constructions as neochristos –that is, “freshly smeared”)!  However, in the Greek translation of Jewish Scripture called the Septuagint, christos is used 49 times to translate the Hebrew word meshiach, or messiah (for example, Lev 21:10, 12; 1 Sam 2:10; Ps 2:2; Isa 45:1).  This word also means “smeared”–smeared with oil, or anointed.  Anointing was used to designate people and objects set aside for a special purpose–but of course, in time, the term “Messiah” came to be used as a title for the King who was to come.  “Jesus Christ,” then, is not a name, but a confession: “Jesus IS the Christ,” the King who was to come.  But his name is “Jesus.”

Matthew 1:18-24, which tells the story of Jesus’ naming, also provides the background for a Child ballad (no. 54) still sung in Appalachia, a Christmas carol called “The Cherry Tree.”   This strange little story never makes it into the Christmas pageants–probably because of its mature language and themes!

Mary, Joseph’s fiancee, is pregnant.  Joseph reaches the obvious, natural conclusion: Mary must have been unfaithful to him.  Certainly, the engagement was off, but in that culture, at that time, more could have–indeed many would have thought, should have–happened.  Mary’s actions had brought shame upon Joseph, as well as upon her own family.  At the least, she should have been exposed to public shame.  At the worst, with the evidence of her pregnancy to confirm her faithlessness, Mary could have been stoned to death (Leviticus 20:10; Deuteronomy 22:13-28, especially 20-21 and 23-27). Sadly, in much of the world–and even in America!–such “honor killings” still occur today. 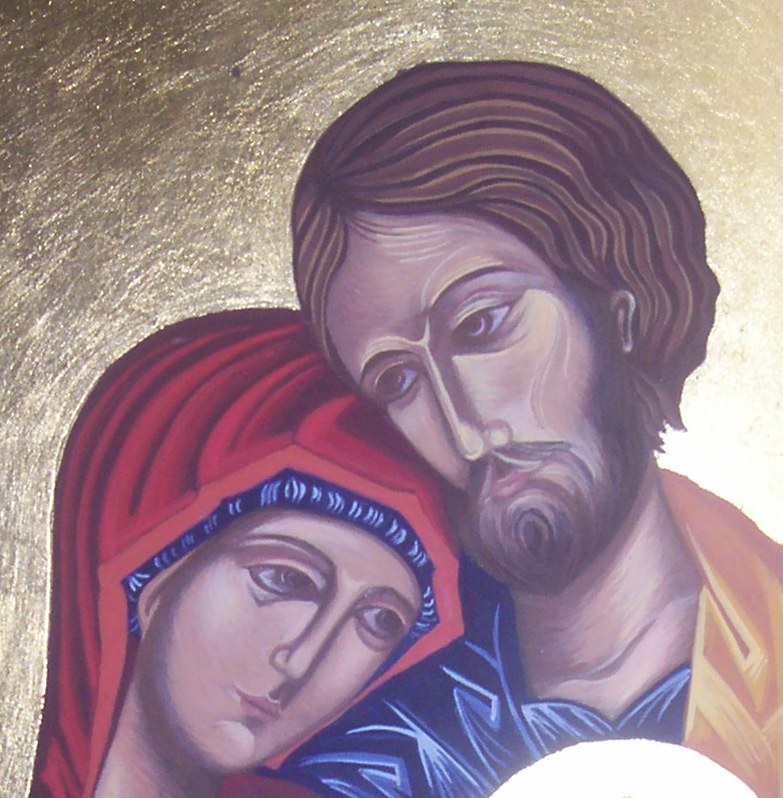 Joseph her husband was a righteous man. Because he didn’t want to humiliate her, he decided to call off their engagement quietly (Matt 1:19).

Before Joseph could act on his decision, however, an angel appeared in a dream, to assure him of Mary’s faithfulness.  Her pregnancy was a miracle; her child “was conceived by the Holy Spirit” (Matt 1:20)!  Further, the angel gave Joseph instructions concerning this child: “you will call him Jesus” (Matt 1:21). 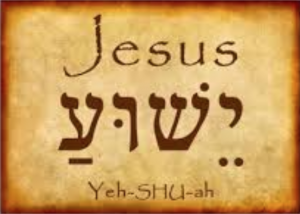 The name Jesus (Greek Iesous; Aramaic Yeshua) is a form of the name “Joshua,” derived like that name from the Semitic word for “salvation,” yeshuah.  He is to be named this because of his life’s work: “he will save his people from their sins” (Matt 1:21).

A second name is also given to the child, however–not by Joseph, but by the writer of this gospel, for the eyes and ears of its readers and hearers (Matt 1:22-23):

In Matthew’s gospel, then, two names are applied to the Christ before he is even born: Jesus and Emmanuel.  Both names figure prominently in Matthew’s account of Jesus’ suffering, death, resurrection, and ascension.

In both Matthew and Mark, Jesus eats a Passover meal with his disciples, breaking the bread and sharing the cup.  Mark 14:22-25 reads,

While they were eating, Jesus took bread, blessed it, broke it, and gave it to them, and said, “Take; this is my body.” He took a cup, gave thanks, and gave it to them, and they all drank from it.  He said to them, “This is my blood of the covenant, which is poured out for many.  I assure you that I won’t drink wine again until that day when I drink it in a new way in God’s kingdom.”

Matthew’s version follows Mark’s, but with one important addition.

He took a cup, gave thanks, and gave it to them, saying, “Drink from this, all of you. This is my blood of the covenant, which is poured out for many so that their sins may be forgiven. (Matt 26:27-28).

That last phrase, only Matthew has.  Remember that the angel had said, “you will call him Jesus [that is, Yeshua, or “Savior”], because he will save his people from their sins” (Matthew 1:21).  But, how?  Only now do we begin to see.  Somehow, in his death, Jesus takes upon himself the ugliness and horror of human life, human evil, human sin.

Now we come to the cross.  In Matthew, the death of Jesus is described in more detail than in Mark’s gospel.  In particular, Matthew has a sequence of three groups of people who mock Jesus as he is hanging on the cross.  Their words are important (look particularly at the words in italics).  First there were the passers-by (27:39-40), who said,  “So you were going to destroy the temple and rebuild it in three days, were you? Save yourself!”  (Remember his name–Yeshua, “the Savior”)  “If you are God’s Son, come down from the cross.”  (Remember his name–Immanuel, “God with us”).

Next the religious leaders, the chief priests, the scribes, the elders mock him, too:  “He saved others, but he can’t save himself. He’s the king of Israel, so let him come down from the cross now. Then we’ll believe in him. He trusts in God, so let God deliver him now if he wants to. He said, ‘I’m God’s Son’” (27:42-43).

As in Mark, so in Matthew, Jesus cries out, “Eli, Eli lema sabachthani?” (27:46)–combined Hebrew and Aramaic for “My God! My God, why have you left me all alone?” (Psalm 22:1).  But the mocking crowd misunderstands him (Matt 27:47-49).  Someone says, “He’s calling Elijah;” someone else says  “Let’s see if Elijah will come and save him.”  But no one will save him, because he is determined to save everyone.  It is by his death that he brings salvation.

St. Gregory of Nazianzus expressed this idea quite well: “That which was not assumed is not healed; but that which is united to God is saved” (to gar aproslepton, atherapeuton ho de henotai totheu, touto kai sozetai).  By his life, the Son as Immanuel brings God to us and us to God.  By his death, the Son as Yeshua enters our death and evil and abolishes its power forever.  By his resurrection and ascension, he completes the meaning of both his names.  He is Jesus, our Savior, who destroys our death.  He is Emmanuel, God with us, who makes us fully “at one” with God: which is what “atonement” means.

A Merry Eighth Day of Christmas, friends, and a joyous New Year 2020!

I owe the insight into the names in Matthew’s gospel that I have shared here to my colleague John Blumenstein, who completed his Ph. D. in New Testament while I was working on mine in Hebrew Bible.  The Blumensteins were our neighbors in campus housing, and our dear friends–in fact, it was John who prompted me to apply for my first teaching job, and started me down this trajectory that my ministry has followed for 30 years.  Wherever you are today, John, and whatever you are up to–thank you!

One thought on “The Holy Name”