In these blogs, we have been reflecting on what the Bible says about the end of the world.  Our study has been prompted specifically by the concern that the COVID-19 pandemic is a biblical sign of the end-times.  So, does the Bible have something to say about our times?

The answer, actually, has a great deal to do with what question we are really asking.  If the question is, does the Bible speak to our times, the answer is emphatically yes!  Certainly, the Bible has plenty to say about God’s presence with us in times like ours.  Father James Martin in particular has a faithful, encouraging, and biblical word for these days:

In these frightening times, Christians may find comfort in knowing that when they pray to Jesus, they are praying to someone who understands them not only because he is divine and knows all things, but because he is human and experienced all things. But those who are not Christian can also see him as a model for care of the sick. Needless to say, when caring for someone with coronavirus, one should take the necessary precautions in order not to pass on the infection. But for Jesus, the sick or dying person was not the ‘other,’ not one to be blamed, but our brother and sister. When Jesus saw a person in need, the Gospels tell us that his heart was ‘moved with pity.’ He is a model for how we are to care during this crisis: with hearts moved by pity. . . . I don’t understand why people are dying, but I can follow the person who gives me a pattern for life.

However, if the question is, does the Bible speak of our times–that is, does the Bible predict what is happening to us today, or what will happen to us tomorrow–then the answer is no.  The Bible is not a horoscope, Tarot deck, Ouija board, or crystal ball.  The Bible gives us hope, not by revealing to us what will happen tomorrow, but by assuring us that no matter what happens tomorrow, God is, and will be, with us.

The picture at the top of this post shows the famous Four Horsemen of the Apocalypse, as painted by Russian artist Victor Vasnetov.  The image comes from Revelation 6:1-8:

Then I looked on as the Lamb opened one of the seven seals. I heard one of the four living creatures say in a voice like thunder, “Come!”  So I looked, and there was a white horse. Its rider held a bow and was given a crown. And he went forth from victory to victory.  When the Lamb opened the second seal, I heard the second living creature say, “Come!”  Out came another horse, fiery red. Its rider was allowed to take peace from the earth so that people would kill each other. He was given a large sword.  When he opened the third seal, I heard the third living creature say, “Come!” So I looked, and there was a black horse. Its rider held a balance for weighing in his hand. I heard what sounded like a voice from among the four living creatures. It said, “A quart of wheat for a denarion [a day’s pay for a laborer], and three quarts of barley for a denarion, but don’t damage the olive oil and the wine.”  When he opened the fourth seal, I heard the voice of the fourth living creature say, “Come!”  So I looked, and there was a pale green horse. Its rider’s name was Death, and the Grave was following right behind. They were given authority over a fourth of the earth, to kill by sword, famine, disease, and the wild animals of the earth.

John’s four horsemen are drawn from the prophecies of Zechariah (see Zech 1:7-17; 6:1-8).   While Zechariah’s horsemen were messengers of peace and deliverance, however, John’s represent war: from the “glory” of heroism, through the depredations wrought by violence, scarcity with attendant profiteering, and of course, disease and death.  But, what does that word “apocalypse” mean?

In everyday English, “the Apocalypse” is a civilization-ending cataclysm.  The entire genre of “post-apocalyptic” fiction, from the “Mad Max” movies to the “zombie apocalypse” and its aftermath (especially in Robert Kirkman’s comic-book series “The Walking Dead” and the AMC television production based on it) builds on this popular understanding of the word.

Yet at its source, “apocalypse” is a surprisingly gentle word.  The Greek apocalupsis does not mean doom and destruction.  It means “uncovering,” “unveiling,” or “a revelation.” This is the first word in the last book of the New Testament, which is accordingly called “Revelation” by Protestant Christians, and the “Apocalypse of John” in Roman Catholic circles.

In biblical studies and related disciplines, the term “apocalypse” is applied not only to the last book of Christian Scripture, but also to a number of other texts, both biblical and extra-biblical, that bear a family resemblance to that strange, visionary book. Daniel, the latest-dated book in the Hebrew Bible (likely from around 164 BCE) is called an apocalypse, as it is more like Revelation than it is like any other book in the Hebrew Bible—just as Revelation is more like Daniel than it is like any other book in the New Testament!  Other passages on the left-hand side of the Bible commonly identified as apocalypses (or sometimes, as apocalyptic prophecy) include Isaiah 24—27, Ezekiel 38—39; Joel 2:28–32 (3:1–5 in Hebrew); and Zechariah 14.  In the New Testament, Mark 13 with its parallels in Matthew 24:1–44 (considered in our last post) and Luke 21:5–33 is commonly called the “Synoptic Apocalypse.” In Jewish literature from the first few centuries before and after the Common Era, we can identify as apocalypses such books as 1 Enoch, 4 Ezra, and the Assumption of Moses.

Of course, “family resemblance,” while evocative, is too subjective and imprecise to be useful. Most scholars today agree on the definition of “apocalypse” as a literary genre developed in 1979 by the Apocalypse Group of the Society of Biblical Literature Genres Project (John Collins, “Towards the Morphology of a Genre,” Semeia 14 [1979]: 9):

‘Apocalypse’ is a genre of revelatory literature with a narrative framework, in which a revelation is mediated by an otherworldly being to a human recipient, disclosing a transcendent reality which is both temporal, insofar as it envisages eschatological salvation, and spatial insofar as it involves another, supernatural world.

We might wonder from this definition how apocalypse is any different than prophecy.  After all, Israel’s prophets do have visions of the divine world (for example, in Isa 6:1-8), and do make predictions about future events (as in Jer 7:1-20).  Indeed, Revelation identifies itself as prophecy (Rev 1:3), and while the Hebrew Bible places Daniel among the Writings (or Kethubim) rather than the Prophets (Nebi’im), our Old Testament follows the Greek Septuagint in placing Daniel between Ezekiel and the Book of the Twelve: squarely among the prophetic books.

But apocalypses assume a great gulf between the world of the revelation and our human world.  The supernatural worlds of apocalypses are inaccessible from our world–hence the need for supernatural go-betweens to reveal the vision.  The opening verses of Revelation illustrate this well, with a succession of intermediaries (numerals added):

A revelation of Jesus Christ, which God [1] gave him [that is, Jesus, 2] to show his servants what must soon take place. Christ made it known by sending it through his angel [3] to his servant John [4],  who bore witness to the word of God and to the witness of Jesus Christ, including all that John saw (Rev 1:1-2). 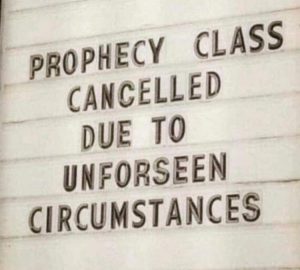 Similarly, the future envisioned in apocalypses is infinitely removed from anything that our own efforts can accomplish.  By contrast, the prophet’s message about the future is intended to influence actions in the present.  As a result, as we have seen, prophetic predictions are conditional (to the consternation of Jonah)!  Prophecy speaks the word of the LORD into a particular context–which is why, in the Hebrew Bible, the “historical books” of Joshua, Judges, Samuel and Kings are included among the Nebi’im, or Prophets.  But regarding the future, God remains supremely free to do as God chooses.

Since the point of prophetic proclamation is a call to action in the here and now, the prophets were commanded to proclaim the word of the Lord (see Amos 7:14-15; Jer 1:7-8; Ezek 3:17-21).  The prophet must speak: indeed, Jeremiah laments,

I thought, I’ll forget him;
I’ll no longer speak in his name.
But there’s an intense fire in my heart,
trapped in my bones.
I’m drained trying to contain it;
I’m unable to do it (Jer 20:9).

In sharp contrast, Daniel is told, “But you, Daniel, must keep these words secret! Seal the scroll until the end time!” (Dan 12:4; compare Dan 8:26; Rev 10:4). Since Daniel is set in the time of the exile and its immediate aftermath, the “future” it describes is indeed distant (although for the persecuted community actually addressed by this book, that time had come).  But the point is that there is no reason for Daniel to announce his revelation of the future to the world, as it can make no difference: “Many will purify, cleanse, and refine themselves, but the wicked will act wickedly. None of the wicked will understand, but those skilled in wisdom will understand” (Dan 12:10). Intriguingly, Revelation reverses this instruction, although like Daniel, it still holds that the fate it describes is unalterable:

This notion of a fixed, inevitable, and unchangeable future is distinctly “unprophetic”—and plainly apocalyptic.  Apocalypses are inherently pessimistic about this world, its future, and the capabilities of human action to bring real change.  So, in apocalypses, the future is unfailingly grim: social order and natural order alike will collapse, so that with this world’s end, a new world may begin.

As Paul Hanson observes, “This world-weariness has been the mark of every apocalyptic movement” (“Old Testament Apocalyptic Reexamined,” Interpretation 25 [1971]: 479). Whether resulting from an experience of exclusion (like the marginalized community responsible for Isaiah 25–27), from self-exile (like the Qumran community that treasured 1 Enoch and preserved the Dead Sea scrolls), from persecution (like Daniel’s community) or from the threat of persecution (like the community of John in Revelation), “world-weariness” is a common feature of the apocalyptic mindset.

Indeed, the same can be said for communities that find particular meaning in apocalypses.  It is no surprise that the threats posed by this pandemic, with its attendant economic struggles and social isolation, have turned the minds of many to this literature.  But an apocalyptic turn of mind does not require actual suffering: the perception of exclusion is enough.  A 2017 poll about discrimination in American society conducted by Daniel Cox and Robert P. Jones found that white Evangelicals–who recall are also the group most inclined to believe in the imminence of the Rapture and the Second Coming–are “the only major religious group in which a majority say Christians face a lot of discrimination” in American society.

As strange as it may seem, given the often bizarre and violent imagery in Revelation and Daniel in particular, these books are meant to be reassuring!  No matter how bad things now appear, or how bad they may become, the future remains securely in God’s hands–which sets us free from crushing concern and despair about what will happen.  As Paul says to the Thessalonians, we are to “encourage each other [the KJV has “comfort one another”] with these words” (1 Thess 4:18).  This is the message of apocalypse–and particularly of our biblical apocalypses. When instead these texts become a source of anxiety, or an excuse for hostility to one another, they have lost their purpose–as have we.