I have heard more responses, both in the form of comments and in the form of Facebook posts and conversation, on my blog from the first week of August, “‘The wrath of God was satisfied’?” than from any other post since I began this blog in February!  For those just joining us, this post dealt in part with the decision not to include “In Christ Alone” in the new PCUSA hymnal, after the authors insisted on keeping the line

Till on that cross as Jesus died,
The wrath of God was satisfied.

In a blog at Patheos’ Evangelical Portal, called “Christianity Without the Atonement” Gene Edward Veith concludes that, for the hymnal committee, “What was objectionable is the doctrine of the atonement.”

I don’t understand Mr. Veith’s conclusion at all.  Indeed, knowing people involved in this decision, and having team-taught a course with one of them (called, ironically, “Models of the Atonement”!), I know that the committee did not object to the Christian doctrine of the atonement.  Mr. Veith rightly asks,

What is the point of Christianity without the atonement?  It becomes turned into another religion.  I suppose the attraction is that it gives us another religion of law, which people somehow prefer to a religion that says they are sinners in need of forgiveness and, yes, atonement.

The question, however, is not, and has never been, whether we believe in the atonement or not.  The cross is not at issue.  The love of Jesus, and his suffering for us; the grace of God; the realization that God’s power, love, and grace are communicated by the cross; the fact that we are sinners who cannot save ourselves–none of this is at issue.  The only question is, what happens on the cross?  What does it mean to say, as Christians have said from the very first, that Jesus died for us?

The verb “atone” and the noun “atonement” are  only about 500 years old.  The Oxford Dictionary dates them to the early 16th century, when they were coined out of  the phrase “at one”–influenced by the Latin word adunamentum (“unity”), and an older word, “onement” (from an obsolete verb form, “to one,” meaning “to unite”).  The word was used particularly in Christian circles to talk about the unification of God and humanity accomplished by Christ.

In particular, “make atonement” was used in the KJV to translate the Hebrew verb kipper, particularly as it is used in Leviticus 16 in connection with Yom Kippur, the Day of Atonement.  While this word apparently had the original meaning “cover,” it came to be used specifically for rites of cleansing and purification.  In ancient Israel, Yom Kippur was the day when all lingering defilement from the previous year, either accidental or deliberate, was expunged, making full access to and communion with God possible in the new year. 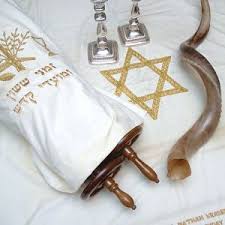 The CEB appropriately translates Yom Kippur as “Day of Reconciliation.”  In modern Judaism, Yom Kippur is a day of fasting, self-examination and repentance that concludes the ten Days of Awe with which the Jewish year begins.

The centerpiece of the ancient ritual for this day involved two goats.  One was selected by lot as the goat to be offered as the sin offering (the most familiar translation of the Hebrew khatat; the CEB reads “purification offering,” which better catches the significance of this sacrifice in ancient Israel).  The second goat is Azazel’s.  We have no idea what this means; perhaps Azazel was a monster or demon believed to live in waste places, or perhaps Azazel is an old word for “wilderness.”  The KJV read “scapegoat,” which has entered our language as a person or group who are blamed for wrongs done by others. 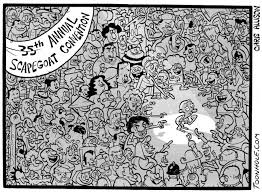 In Leviticus, the goat for Azazel is not a sacrifice, nor is it killed.  It is driven out into the wilderness, symbolically carrying away the sins of the people.  The other goat, selected by lot as belonging to the Lord, is sacrificed.  Its blood is taken by the high priest into the inner room of the shrine, called the Most Holy Place, where God was believed to be specially present.

In the shrines of neighboring people, built on a similar plan to Israel’s shrine, this inner room contained the image of the god.  But in Israel’s temple, this inner chamber held not an image, but a golden box, usually called the Ark (though the Hebrew word for the Ark, ‘aron, simply means “box,” or “chest”).  The lid of the Ark was a slab of gold, molded in the image of two cherubim: terrible semi-divine heavenly beings like winged sphinxes. The cherubim‘s inner wings overlapped to form a seat–a cherub throne, as the divine title “the LORD, who is enthroned on the cherubim” indicates (for example, 1 Sam 4:4; Ps 80:1).  The Ark served as the Lord’s footstool, the place where the divine feet touch the earth.  Hence, the ark was the intersection of divine and human worlds, and the place of the Lord’s special presence.  In the days of Israel’s wilderness wandering, the Ark was where Moses and Aaron encountered the Lord (for example, Exod 25:22).

What does this have to do with the cross?  In several places in the New Testament, sacrificial language is used for the cross.  In Romans 3:23-25 (NRSV), Paul writes:

since all have sinned and fall short of the glory of God; they are now justified by his grace as a gift, through the redemption that is in Christ Jesus, whom God put forward as a sacrifice of atonement by his blood, effective through faith.

The Greek word translated “sacrifice of atonement” in the NRSV (the KJV has “propitiation”) is hilasterion.  This same Greek word is used in Leviticus 16, not for the sacrifice, but for the kapporet.  Better, then, is the CEB translation, “place of sacrifice,” though even that may be misleading.  Paul’s point is that the cross is where atonement happens: just as, in the ancient rites on Yom Kippur, the lid of the Ark was the place where the damage done by a year of uncleanness was undone.

Scripture provides numerous models for thinking about what happens on the cross: indeed, in these three short verses, Paul offers two: an economic model (our freedom is purchased, that is, we are redeemed, by Christ’s death), and a ritual model (Jesus as our hilasterion).  The point of his ritual metaphor is that the cross is where the gap between God and humanity is undone.

Later Christian thinkers offered still more models, including John Calvin’s proposal that Jesus took on himself the punishment due us for our sin–a model called “penal substitution.”  This is the model reflected in the statement that God’s wrath was satisfied by Jesus’ death.  Atonement does not mean “penal substitution,” however.  That model has nothing to do with Yom Kippur: Leviticus does not say that the sacrifices take the place of the people who offer them, and neither does Paul.

There is more to say, of course.  My only point, in this blog, is that atonement is a bigger idea than any single model.  We can have questions and reservations about Calvin’s explanation of the atonement without denying the reality of the atonement.  However we wrap our heads around this truth, we can confess unwaveringly what the very earliest church discovered: that in the person of Jesus, and particularly in his suffering and death, the gap between humanity and divinity has been overcome.  Through Jesus, we are made “at one” with God.