In Genesis 3, the first earthlings Adam (whose name reveals his connection to adamah, the earth) and Eve (Hebrew Khawah, which the text relates to khayah, “life,” as she is mother to all living) violate God’s command by eating fruit from the Tree of the Knowledge of Good and Evil.  The LORD had told them,

Eat your fill from all of the garden’s trees; but don’t eat from the tree of the knowledge of good and evil, because on the day you eat from it, you will die! (Gen 2:16-17).

The snake told them that this was not so:  “You won’t die! God knows that on the day you eat from it, you will see clearly and you will be like God, knowing good and evil” (Gen 3:4-5).  Sure enough, when they eat the fruit, they do not die–at least, not right away.  But as a consequence of eating this fruit, they are exiled from the Garden: they lose their access to the other special tree of Eden, the Tree of Life, and so become mortal.

The meaning and significance of the Tree of Life is fairly obvious.  But what about the tree of knowledge?  What could it represent?

One approach holds that the name of the tree is irrelevant.  The point is that the fruit of this particular tree is prohibited by God.  In his novel Perelandra, C. S. Lewis reimagined this story as unfolding on a watery world in which most vegetation and animal life lived on floating islands.  Here, living on the “fixed land” was the one thing forbidden by God.  There was no reason given for this prohibition–the issue was simply obedience, or disobedience, to God’s word. By this reading of the Genesis account, the choice Adam and Eve made to violate God’s command is the sole point of the story.

Certainly, the humans do disobey, and their action has consequences.  But it is difficult to imagine that no meaning or purpose is invested in the tree being given such an intriguing name.

Some have proposed that eating the fruit of the Tree of the Knowledge of Good and Evil means learning the difference between good and evil, and so gaining freedom of choice.  Before, the humans could only do what God wanted them to do.  Now, having eaten the fruit of the Tree of Knowledge, they have the capacity to make their own choices, which inevitably leads to their making wrong ones.

In the story as it unfolds in Genesis, however, there is no inkling that God has deprived God’s creations of freedom.  The woman’s choice to eat the fruit, as Phyllis Trible observes, demonstrates careful reflection and independent thought:

She contemplates the tree, taking into account all the possibilities.   The tree is good for food; it satisfies the physical drives.  It pleases the eyes; it is esthetically and emotionally desirable.  Above all, it is coveted as the source of wisdom. . . Thus the woman is fully aware when she acts, her vision encompassing the gamut of life (from “Eve and Adam: Genesis 2–3 Reread”).

In short, eating from the tree does not covey these discriminating capacities: the woman clearly has them already.

Perhaps the best way to understand the expression “the Knowledge of Good and Evil” is as a merism, like “young and old” or “length and breadth,” referring not just to the two opposite terms mentioned, but to the entire range between them.  This would mean that eating the fruit conveyed Godlike knowledge of everything, from good to evil.  That is in fact what the snake promises: “God knows that on the day you eat from it, you will see clearly and you will be like God, knowing good and evil” (Gen 3:5).  Indeed, after the man and woman have eaten the fruit, the LORD says to the heavenly council:

“The human being has now become like one of us, knowing good and evil.”  Now, so he doesn’t stretch out his hand and take also from the tree of life and eat and live forever, the Lord God sent him out of the garden of Eden to farm the fertile land from which he was taken (Gen 3:22-23).

Reading canonically, these references to the humans becoming “like God” are bound to recall to our minds the statement in the first creation account that the woman and man are created in God’s image (Gen 1:26-27)–an idea not expressed in this second account.  But for the reader encountering these texts in their context in Genesis, the connection  produces a magnificent irony, not apparent when reading the passages separately. 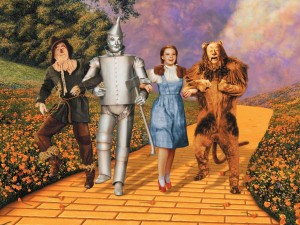 In L. Frank Baum’s The Wizard of Oz, all the characters seek from the Wizard qualities that we know, from the story, they already possess: the “brainless” Scarecrow does all the planning; the “cowardly” Lion courageously defends Dorothy and his friends from their enemies, and no one could possibly be more tender-hearted than the “heartless” Tin Woodsman!  Just so, in the final form of the Genesis narrative,  the woman and the man want what they already have: to be like God.  But they do not realize this, and so lose the Garden, and all that it represents.

So what does the Garden represent?  At the end of Genesis 2, we are told, almost in passing, “The two of them were naked, the man and his wife, but they weren’t embarrassed” (Gen 2:25).  Of course, when they eat the fruit, that changes: “Then they both saw clearly and knew that they were naked” (Gen 3:7).  The time in our lives when we are naked and not embarrassed, when we really do not care about wearing clothes at all, is in early childhood.  With puberty, however, comes a painful awareness of bodies–our own, and others!  Could it be that Eden represents a childish innocence, and that eating the fruit represents personal and sexual awakening and maturity?  If so, then this is not a story about a “fall” at all. It is a story about growing up, making choices, taking responsibility, and living with the consequences of our decisions, for good or ill.

Theologian Paul Tillich proposed that the story of the fall represented “the fall from essence into existence” (Systematic Theology, Vol 2 [Chicago: University of Chicago, 1957], 29-44).  The ideal represented by the Garden is lost to us, not because of a single event in prehistory, but because in actual existence, such ideals are unattainable.  In the story, as the earthlings leave the garden, they enter history: our world of painful choices, of estrangement from one another and from God, and of course, of growth, aging, decline, and death.  That is the way it is for real people, in the real world.

Sometimes, Christians speak of Jesus’ coming as though it were a patch, or a fix: God’s way of addressing the sin problem.  But as systematic theologian Edwin Christiaan van Driel persuasively reminds us, there has long been another strain of Christian thought (sometimes called supralapsarianism), which regards the Incarnation as too big an idea for this single application.  God knew from before creation that calling into being something that was not God, an authentically autonomous creation, meant that that creation would inevitably, in time, act in ways contrary to God’s will.  Indeed, God’s act of creation presupposed that God would consequently enter time and space as a creature, in order to enter fully into relationship with us.  Knowing this, and foreknowing all that it would cost, God created the world anyway.

By this reading, the story of Genesis 3 prefigures the drama of redemption and reconciliation, and so is cause not only for sadness at innocence lost, but praise for God’s determination not to abandon us.   A medieval Christmas carol expresses this idea beautifully:

Bounden in a bond;

Thought he not too long.

And all was for an apple,

An apple that he took,

Nor had one apple taken been,

The apple taken been,

Then had never Our Lady

Blessed be the time

That apple taken was.

Therefore we may singen