It happens to me once or twice a month in Long Hall, at Pittsburgh Theological Seminary where I teach.  I am running for the elevator (usually, this happens when I am running late for a class or a meeting).  I jump in, the doors open, I jump out , expecting to find myself on the third floor, where the classrooms are–and I am in the basement, where the mailboxes live.  Or, I am on my way to get my mail.  I step confidently into the elevator; the doors open, I step out, expecting to find myself at the mailroom–and I am on the third floor.

I don’t know why this happens.  I am inclined to chalk it up to the innate perversity of inanimate objects.  But I am willing to acknowledge the possibility that, at least a couple of times a month, I don’t know whether I’m going up or coming down.

So, what does this have to do with this season of Advent, when we remember Jesus’ coming long ago in Bethlehem, and anticipate his coming again (the Latin advenire means, “come to;” adventus means “arrival”)?  Many regard Christianity as a means of escape from the world.  Indeed, for those who sought to join the Methodist societies, John Wesley had “only one condition previously required . . . a desire to flee the wrath to come” (John Wesley, ed. Albert C. Outler; Library of Protestant Thought [New York: Oxford University, 1964], 178).  Many who understand salvation in these terms hope that they will soon be taken out of this world, together with other true believers, in the Rapture, and go up into heaven to live with God.  Salvation is about our “going up.”

A whole Christian industry has grown up around this idea, manifest most visibly in Timothy LeHaye’s Left Behind series of books, graphic novels, movies, television shows, and video games.  The idea of an imminent Rapture has been extremely influential.  According to a 2010 study by the Pew Research Center, 41% of Americans surveyed expect Christ to return before 2050; among white Evangelicals, this number rises to 58%.

But I am not persuaded that this is the best reading of that verse.  The bulk of Matthew 24 offers warnings of persecution and trial, not instruction on how to escape them.  Jesus tells his followers, “They will arrest you, abuse you, and they will kill you. All nations will hate you on account of my name” (Matt 24:9).

Jesus compares those days to “the time of Noah,” when devastation came suddenly upon a people unprepared:

In those days before the flood, people were eating and drinking, marrying and giving in marriage, until the day Noah entered the ark. They didn’t know what was happening until the flood came and swept them all away (Matt 24:37-39).

By this reading, the “one taken” is not saved, but lost: to death, to destruction—or perhaps quite literally taken by the authorities, arrested and hauled away in chains.

This chapter is not about our “going up.”  It is rather about Jesus “coming down”!  The coming of Jesus, the Human One (literally “Son of Man”), will also be unexpected, and unpredictable:  “But nobody knows when that day or hour will come, not the heavenly angels and not the Son. Only the Father knows” (Matt 24:36).  Unlike 41% of the American population, Jesus does not know when this will be!  He compares himself to a thief:

But you understand that if the head of the house knew at what time the thief would come, he would keep alert and wouldn’t allow the thief to break into his house.  Therefore, you also should be prepared, because the Human One will come at a time you don’t know (Matt 24:43-44).

The point, then, is to be ready–whenever his coming might be.

Isaiah 2:1-5 also speaks of God’s future–the world to come.  This famous Bible passage was the inspiration for the monument outside the UN building.

Then they will beat their swords into iron plows
and their spears into pruning tools.
Nation will not take up sword against nation;
they will no longer learn how to make war  (Isa 2:4).

This vision of peace is realized in a transformed world, in which Zion, the hill on which Jerusalem was built, and atop which the Temple had stood, has become “the highest of the mountains” (Isa 2:2)!  Still, the future world of which Isaiah dreams remains our world: it includes not only Israel, but the foreign nations. Far from being “left behind,” the nations are drawn to Zion by God’s truth, justice, and peace established there.  As Zion is “lifted above the hills,”

peoples will stream to it.
Many nations will go and say,
“Come, let’s go up to the LORD’s mountain,
to the house of Jacob’s God
so that he may teach us his ways
and we may walk in God’s paths.”
Instruction will come from Zion;
the LORD’s word from Jerusalem.
God will judge between the nations,
and settle disputes of mighty nations (Isa 2:2-4).

To be sure, this is the LORD’s doing—but God does it, not in some other world, but in this world!  Like Matthew 24, this vision is not about our “going up,” but about the LORD coming down.

What difference does this make?  If we believe that we are “going up,” out of this world, we will be far more concerned with being certain that our ticket is punched, and that we don’t miss our flight, than we will be with trying to solve this world’s problems.  After all, if this world is doomed anyway, why should we care?  What motivation do we have to care for the world, or for its people?

But what if salvation is not about escape from this world, but about God’s transformation of this world?  Then, we will seek to be a part of what God is doing, here and now, to bring in God’s kingdom.  We will want to be found at our Lord’s coming doing those things that Jesus did among us: feeding people, healing people, freeing people, proclaiming the good news of God’s salvation.  The task before us is immense, the problems seemingly unsolvable. 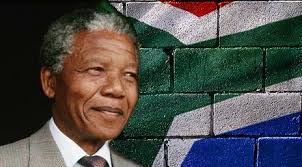 But as we celebrate the life of Nelson Mandela, and the collapse of apartheit in South Africa, we are reminded that sometimes, as we set forth in God’s work, we discover to our astonishment that some intractable problems turn out to have solutions after all!   Yet whether we are successful or not, we will not despair, because we know that, in the end, the kingdom remains God’s, and that God will bring it into fruition in God’s time, when our Lord Jesus “comes down” in glory.

One thought on “Going Up, or Coming Down?”