In America and around the world, attitudes regarding lesbian, gay, bisexual, trangendered, and questioning (LGBTQ) persons continue to be in flux.  On the one hand, a July 2013 Gallup poll indicates that for the first time a majority of Americans, 52%, favor the legalization of same-sex marriage.  On the other hand, laws passed in Russia criminalize “gay propaganda,” Uganda‘s parliament passed a bill condemning those convicted for homosexual practice to life in prison, and in Iran, homosexual activity is punishable by death.  Jonathan Cahn, a Messianic Jew and rabbi, is the author of Harbinger, a book which applies prophecies concerning Israel to the United States.  He has claimed that both the 9/11 attacks and the 2008 economic recession were warnings from God for America to repent, specifically, of tolerance toward homosexual behavior.

This past month saw a tremendous flurry of media attention to LGBTQ issues.  In an interview with GQ, Mr. Phil Robertson, patriarch of the millionaire family of duck call manufacturers featured in the popular reality series “Duck Dynasty,” voiced his views on homosexuality in graphic terms (I apologize for reproducing these words, but believe it important that what Mr. Robertson actually said is before us):

It seems like, to me, a vagina—as a man—would be more desirable than a man’s anus. That’s just me. I’m just thinking: There’s more there! She’s got more to offer. I mean, come on, dudes! You know what I’m saying? But hey, sin: It’s not logical, my man. It’s just not logical.

In the article, Mr. Robertson goes on to relate homosexuality to bestiality (sex with animals) and adultery:

A&E, the network on which “Duck Dynasty” airs, initially responded by announcing that Mr. Robertson would be suspended from the show, then reversed their position in reaction to angry protests from the show’s  fans.  More remarkable, though, were the responses of many Conservative politicians and some Christian leaders supporting Mr. Robertson’s position. Albert Mohler, president of the Southern Baptist Theological Seminary, wrote:

So the controversy over Duck Dynasty sends a clear signal to anyone who has anything to risk in public life: Say nothing about the sinfulness of homosexual acts or risk sure and certain destruction by the revolutionaries of the new morality. You have been warned.

Similarly, Russell D. Moore, president of the Southern Baptist Convention’s Ethics & Religious Liberty Commission, said in an interview on CNN, “Suggesting that people who hold to what every branch of the Christian faith has held to for 2,000 years is somehow bigoted or hateful is not productive for speech.”

Far less attention was paid to some other egregious remarks made in that same interview, on the topic of the civil rights of African Americans:

I never, with my eyes, saw the mistreatment of any black person. Not once. Where we lived was all farmers. The blacks worked for the farmers. I hoed cotton with them. I’m with the blacks, because we’re white trash. We’re going across the field…. They’re singing and happy. I never heard one of them, one black person, say, ‘I tell you what: These doggone white people’—not a word!… Pre-entitlement, pre-welfare, you say: Were they happy? They were godly; they were happy; no one was singing the blues.

This week, we celebrate the life of Franklin McCain, who died at the age of 72.  Mr. McCain was one of the “Greensboro Four” who in 1960 sat, day after day, at the whites-only lunch counter of a Greensboro, NC Woolworth’s, inviting ridicule, persecution, and arrest.  Their act of protest gave rise to sit-ins across the South, and helped overturn the discriminatory Jim Crow laws that Mr. Robertson somehow does not recall.

Still, placing his ignorant comments on race to one side, we must ask: is it the case that the position on homosexuality Mr. Robertson voiced is the position of those upholding biblical Christianity?  Many would argue that it is.  Mr. Robertson, who is undeniably a person of deep personal faith, both alluded to and paraphrased Scripture in his remarks.  Male homosexuality is condemned, along with incest, child sacrifice, and bestiality, in Leviticus 18, as a “detestable practice” (Hebrew to’ebah; see also the parallel to this passage in Lev 20).  Mr. Robertson paraphrases the older (1984) NIV translation of 1 Corinthians 6:9-10, which read:

Do you not know that the wicked [the 2011 NIV has “wrongdoers”] will not inherit the kingdom of God? Do not be deceived: Neither the sexually immoral nor idolaters nor adulterers nor male prostitutes nor homosexual offenders [the 2011 NIV reads, “men who have sex with men”] nor thieves nor the greedy nor drunkards nor slanderers nor swindlers will inherit the kingdom of God.

The United Methodist Church states in its Social Principles:

Although all persons are sexual beings whether or not they are married, sexual relations are affirmed only with the covenant of monogamous, heterosexual marriage. . . . The United Methodist Church does not condone the practice of homosexuality and considers this practice incompatible with Christian teaching (The 2012 Book of Discipline, p. 109).

I am a committed, practicing Christian, an ordained minister of the Gospel, and a life-long Methodist.  I love the Lord, and I love the Bible–in fact, studying the Bible is my life’s work.  Yet I do not agree with my church’s official position, and I am not alone: many committed Christians and students of Scripture disagree with this teaching.

In 2007, Rev. Frank Schaeffer made the decision to officiate at the wedding between his son Tim and Tim’s partner.   Long-simmering complaints against Rev. Schaeffer resulted in a church trial late last year in the Eastern Pennsylvania Conference of the UMC.  Rev. Schaeffer was suspended and told to recant his position; in this last month, when he refused to do so, his ordination was rescinded (although, as the link above makes clear, this matter is far from over). 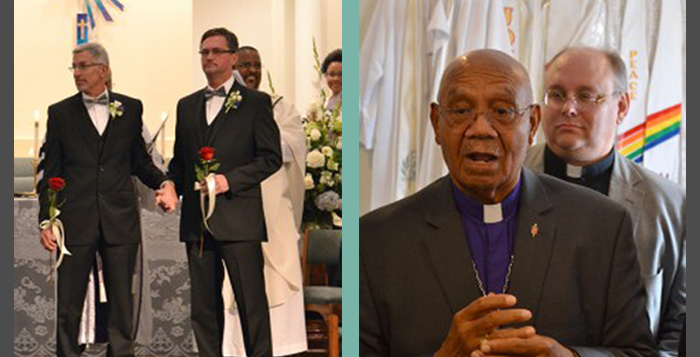 Retired Bishop Melvin Talbert was invited this past year to officiate at the wedding of two men in Center Point, Alabama.  Though asked not to do so by Alabama’s bishop, he decided to perform the ceremony: “I promised to do the right thing no matter what.”  In response, the UMC Council of Bishops has called for Bishop Talbert to be tried, though the conference where he now resides has refused to do so.

Not long ago, I was pleased to get an email from Chris Palmer, a fine young man I got to know through the Summer Youth Institute at PTS. Chris wrote:

The Hebrew Scriptures were always something that I struggled with, but you seemed to unravel their difficulties in a way that was meaningful, and helped me to grow spiritually. However, I have come across another area that has become a hindrance for me in my spiritual development.  . . .  I recently noticed that you were speaking at a conference supporting the LGBTQ community. This is where what hinders me takes root. I am a person who fully supports these communities, and, to me, the claims of scripture that denounce those who are apart of the LGBTQ community seems very contrary to the central claims of the Gospel. However, in my journey to be a faithful person, I hope to remain as obedient as I can to the claims of the scripture which presents this good news.  . . . This tear between my intuition, the scriptures I read, and the church climate that I am a part of (one that has not been so supportive of these communities) has come to weigh heavily on my faith development. . . . I was wondering where you take your stance on these issues.

I have heard many times from sincere people of faith concerns about what Chris eloquently terms “This tear between my intuition, the scriptures I read, and the church climate that I am a part of”–specifically on LGBTQ matters.  So, over the next few weeks, I will address this issue as honestly as I can.  Since I am a Bible guy, rather than a geneticist or psychologist or historian, I will do so through the lens of Bible study. We will consider the biblical texts often thought to pertain to this issue, including those mentioned above.  I will try to show that, in my view, the Bible does not compel us to condemn same-sex relations as sinful.  We will begin, next week, with Sodom.

2 thoughts on “What the Bible Says About Homosexuality: Part One”